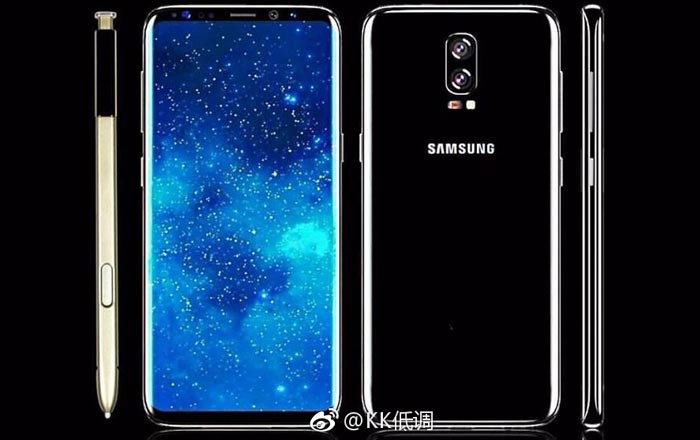 Samsung’s next big flagship the Galaxy Note 8 has popped up on Weibo, the latest in a steady stream of leaks which have been appearing in the run up to its expected launch in the second half of the year. The post claims that the phone will measure 6.3-inch, slightly bigger than the 6.2-inch size of the Galaxy S8+.

Previous speculation had suggested that the Galaxy Note 8 would go for a 6.4-inch QHD+ OLED Infinity Display, so the Weibo leak goes against that. The one thing the past and the present can agree on are the Galaxy Note 8’s dual rear cameras.

Samsung hasn’t hopped on the dual camera trend as yet, one of the few major mobile manufacturers not to do so. The Galaxy Note 8 could change that status quo with the help of a 12MP and 13MP setup on the back. The former is expected to be a wide-angle sensor, while the latter could be a telephoto sensor.

Also See: Samsung Z4 to go up for sale in India on May 19

Other likely features include dual 6P lenses, dual OIS, dual photodiode, and 3x optical zoom. Interestingly enough, KGI Securities’ Ming-Chi Kuo predicts that the Galaxy Note 8’s twin snappers will be superior to the iPhone 7 Plus and equal to the iPhone 8.

Both the iPhone 8 and Note 8 could feature a vertical dual camera array which is said to be better for VR and AR purposes. However, Apple is likely going to place the module to the left and Samsung to the center if past rumors are anything to go by.

When it does come out, the Galaxy Note 8 might try to dazzle consumers with specs like 6GB of RAM, 256GB of ROM, IP68 certification against dust and water attacks, a rear-facing fingerprint reader, Android 7.1.2 Nougat, a Snapdragon 835/Exynos 8895 processor, a 3600mAh battery, wireless charging abilities, and stylus support.