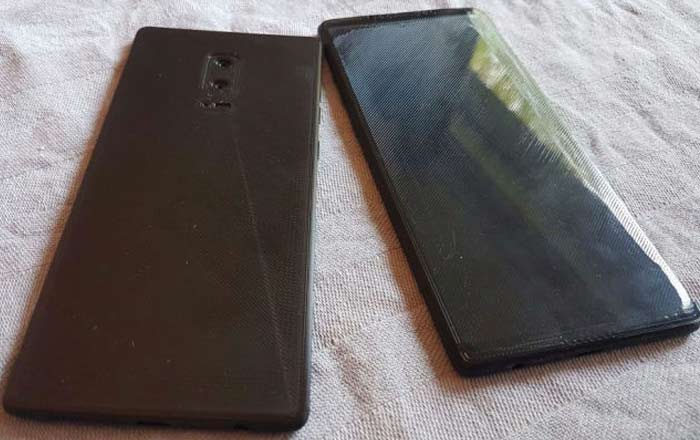 Samsung’s Galaxy Note 8 has allegedly popped up in a new video posted on Twitter by frequent leakster mmddj_china. The footage comes a few weeks after a dummy model of the handset got captured on camera.

The Twitter video showcases the front glass panel of the Galaxy Note 8. If accurate, it looks like the phone will resemble its older brothers the Galaxy S8 and Galaxy S8 Plus. Samsung’s distinct Infinity Display is in full effect here, with almost invisible side borders and very narrow bezels at the top and bottom.

The screen is rumored to measure 6.3-inch diagonally, much bigger than the doomed 5.7-inch Galaxy Note 7. It should be noted that the tipster himself doesn’t know if the video is authentic or not, placing a question mark after the word ‘Note8’ in his tweet.

The dummy unit (up top) of the Samsung handset is a bit more revealing, though again its accuracy can’t be verified at the moment. A YouTuber named Concept Creator uploaded a video of the 3D printed model, asserting that it was constructed using existing leaks.

There’s no sign of a fingerprint reader on the alleged Galaxy Note 8. This could be taken as a sign that the device will boast of an in-screen fingerprint scanner. Other notable features include a dual camera module on the back and S Pen. Previous speculation has hinted that the handset might be equipped with specs like a 3700mAh battery and Snapdragon 835 SoC.