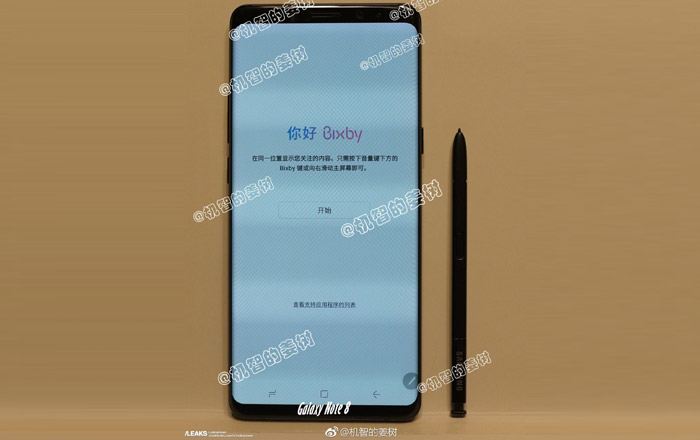 With the Galaxy S8’s launch behind it, Samsung’s now rumored to be concentrating on its next flagship phone, the Galaxy Note 8. Given the fiery fate that befell its predecessor, the smartphone will have a lot of expectations riding on it.

Speculation so far claims that the Galaxy Note 8 will adopt the Galaxy S8’s bezel-less design. An alleged live photo of the phablet seems to back up this assertion, showing off the phone’s Infinity Display that takes up most of the handset’s front panel. An S Pen stylus has been positioned beside it.

The screen is open to Bixby and a small S Pen icon can be seen on the bottom-right curved corner. While it certainly appears legitimate, there is a chance this is just clever hoax. The smartphone in the image may well be a Galaxy S8 or Galaxy S8 Plus next to a Samsung stylus.

Recent rumors have held that the Galaxy Note 8 will measure 6.32-inch diagonally, slightly bigger than the S8 Plus’ 6.2-inch size. This would make it easy for someone to use the latter as a fake version of the former. The only way to know for sure whether or not the photo above is real is if more snaps of the handset emerge showcasing its S Pen slot.

Samsung has so far confirmed that the Galaxy Note 8 is happening, stating that it’ll be better, safer and very innovative. There’s no concrete launch date for the device yet, but it should come out around fall this year.