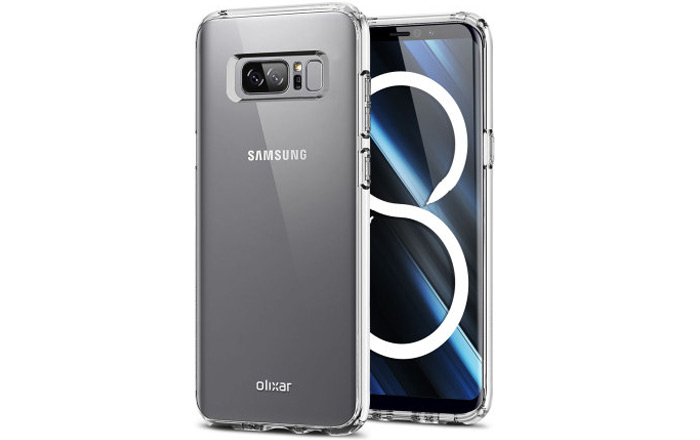 It seems we’ve reached the case maker stage of the Galaxy Note 8 leak cycle, with UK-based retailer MobileFun putting a number of covers up for sale on its website. The accessories were manufactured by Olixar and are being sold in a variety of colors.

The most relevant case for people eager to catch a glimpse of the Galaxy Note 8 is the transparent one. The gel-based cover clearly shows off the phone’s Galaxy S8-inspired design. The Infinity Display eats up most of the bezels, while the brand’s dedicated Bixby button has gotten a prime spot on the side of the handset.

Sadly, the one aspect which most people didn’t want Samsung to carry over is present here as well. We’re talking, of course, about the rear-facing fingerprint scanner. The company reportedly tried to come up with a viable under-display solution, but had to abandon the effort.

Qualcomm’s now come up with an under glass/metal fingerprint sensor of its own, with Vivo set to be the first to debut it. In the meanwhile, people looking to buy the Galaxy Note 8 might have the opportunity to smudge 2 cameras since the smartphone apparently features a twin-lens system.

Samsung actually went ahead and offered a glimpse at what consumers can expect from the Galaxy Note 8’s dual-camera setup at the MWC Shanghai 2017. It’s come up with a new ISOCELL Dual sensor which can be mixed and matched to achieve results like high-quality low-light photography.

Samsung may announce the Galaxy Note 8 in late August or September starting at a €999 (roughly Rs 72120) price tag. It’ll go head-to-head against the iPhone 8 which is also rumored to be an obscenely expensive flagship with a narrow-bezel screen.