Samsung Galaxy Note 8 gets snapped in the wild

Leaks about the Galaxy Note 8 are beginning to appear thick and fast online, with more and more evidence piling up about the handset’s final design. A Vietnamese leakster named Tung Ha recently uploaded a number of images showing off the handset from various angles.

One of the photos is an authentic-looking press render. Going by the picture, the Galaxy Note 8 will look similar to the Galaxy S8 but with a few subtle changes. The Infinity Display can be seen clearly, but the bezels at the top and bottom are a bit less curved at the edges. There’s a wider, boxier style going on here with less elaborate curves on the sides.

The live images appear to match the render for the most part. The one directly below offers a closer look at the dual cameras set to adorn the Galaxy Note 8’s back. The two lenses are located side-by-side next to the heart rate sensor, LED flash, and fingerprint scanner.

The location of the fingerprint reader may disappoint scores of consumers who were hoping Samsung would pull off an under-display solution. This isn’t likely to happen, so people looking to buy the phone will just have to live with the occasional camera smudge.

The next hands-on snap provides a better sense of the Galaxy Note 8’s back, while another zooms in on the device’s bottom half. Based on the latter, the smartphone is going to retain the 3.5mm headphone jack and utilize a USB Type-C port. Even the S-Pen slot can be clearly made out at the extreme right. 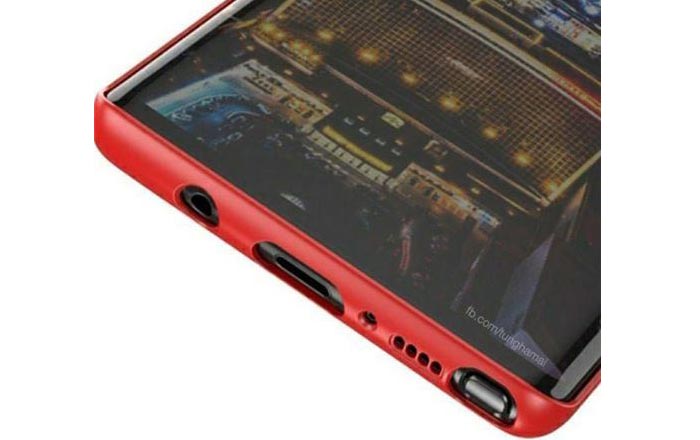 The Galaxy Note 8 is probably going to come out at some point in late August or September. Rumor has it that it’ll kick things off at an astronomical $1000 price tag.