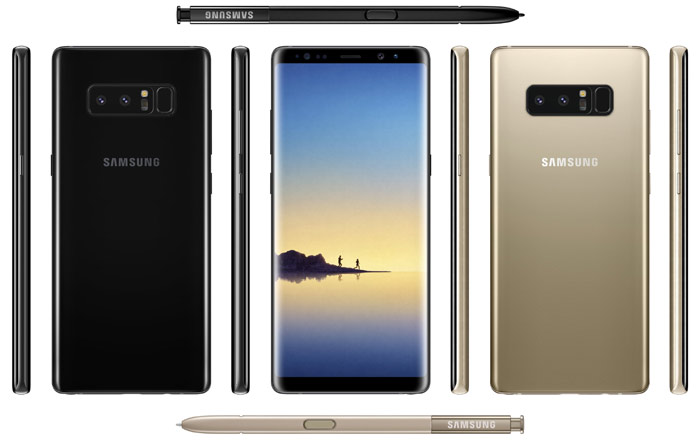 With only a few weeks to go till the Galaxy Note 8’s August 23 launch, leaks about the handset have been coming in more frequently than ever before. Always reliable tipster Evan Blass has now published what he claims is a final list of specs, serving as a follow-up to his previous in-depth report on the smartphone.

As per a person briefed on the Galaxy Note 8’s configuration, the device will indeed carry a pair of dual cameras on its rear surface. Both will be of the 12MP variety and come with optical image stabilization. The main one will feature a wide-angle lens with an aperture of f/1.7 and dual-pixel autofocus. Its telephoto partner will boast of an aperture of f/2.4 and 2x optical zoom.

An 8MP shooter takes care of selfies up front, helped along by an f/1.7 aperture. Based on the photo above, the Galaxy Note 8’s fingerprint scanner will unfortunately be sitting on the back just like the Galaxy S8, but at a greater distance from the cameras to prevent accidental smudges.

Also Read: Samsung’s working on an Emperor Edition of the Galaxy Note 8

Another aspect which the Galaxy Note 8 has in common with the Galaxy S8 is the Infinity Display and its associated 18.5:9 aspect ratio. The former is a bit larger than the S8+ thanks to having a 6.3-inch panel, but the resolution is the same at 1440 x 2560p. The overall design is a bit boxier thanks to the corners being more squared-off.

In terms of dimensions, Samsung’s modified style has translated to measurements of 162.5 x 74.6 x 8.5mm, a bit thicker than the Galaxy S8. As for what’s inside, there’ll be a 3300mAh battery which will probably be under heavy scrutiny given the fate of its disastrous previous variant. Both USB Type-C and wireless charging will be on hand.

Other major specs include Exynos 8895 (global) and Snapdragon 835 (US) processors, 64GB of ROM, and 6GB of RAM. The Galaxy Note 8 is all set to ship in Midnight Black and Maple Gold at first, followed up by Orchid Grey and Deep Blue Sea later. It’ll be priced at around EUR 1000 (roughly $1185 or Rs 75415) when it hits markets in September.