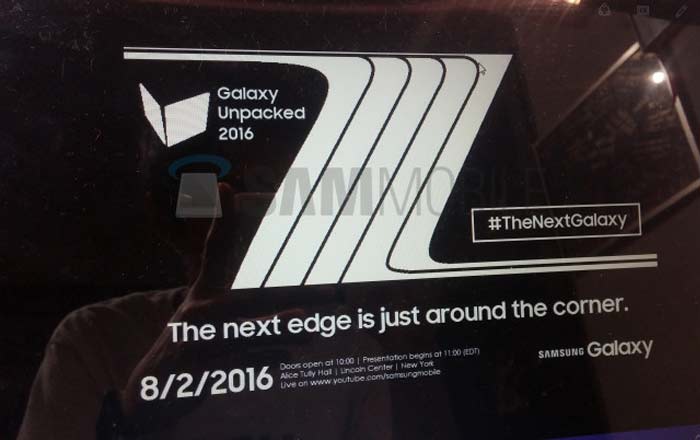 If a new and credible leak is to be believed, then the Samsung Galaxy Note 7 will be unveiled on August 2. If you’re a bit perplexed by seeing the ‘7’ in its name, it’s part of a speculation that this phablet will be skipping the ‘6’ in its naming series in order to achieve parity with the naming of the S series flagships (Galaxy S7 and S7 Edge).

Anyway, the leak which has put forth the August 2 launch possibility for the Samsung Galaxy Note 7 seems like a convincing one since it stems from that image you can spot in the space above. It refers to a ‘Galaxy Unpacked 2016’ event on the said date and even features the hashtag #TheNextGalaxy. This gala will supposedly be held in New York.

Alongside the Galaxy Note 7, Samsung is also expected to unveil its Edge cousin which will come with a dual curved display. This possibility is further strengthened by the text in the above image which reads ‘the next edge is right around the corner.’

The next-gen Note phablet is expected to come with a 5.8-inch display which will most likely be of the Super AMOLED type and boast of a Quad HD resolution. The yet unannounced Snapdragon 823 chipset is expected to form part of it as well, apart from a whopping 6GB of RAM.

Although all guesses were pointing towards a September launch for the Galaxy Note 7 until now, it seems likely that the company could go for an early outing. After all, September is also the month in which the iPhone 7 is expected to the showcased, and Samsung would want to counter its sales early.