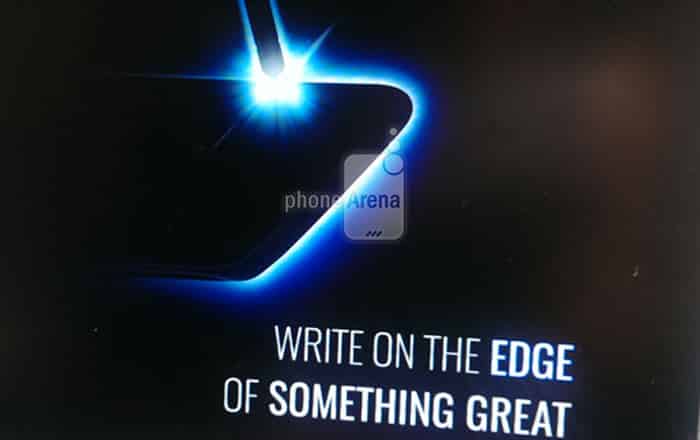 Rumors about the upcoming Samsung Galaxy Note 7 have been flying in thick and fast over the last couple of weeks. It seems more and more likely that the brand is indeed skipping over the ‘6’ moniker to keep the phone in line with the S7 family name.

Apart from the name, a freshly leaked teaser now reveals another game changing aspect of the Galaxy Note 7. The photo showcases the black outline of a phone and a stylus accompanied by the words ‘Write on the edge of something great.’ If this really is an authentic promotional image, it could mean that the handset will let users scribble on the edge display.

The curved portion of previous Samsung phones so far have only allowed things like notifications to show up there, so giving way for writing there may be an interesting new feature. Consumers could use it note down something, such as a phone number, while in another app for maximum productivity.

Adding fuel to this particular fire is the fact that Samsung had filed a patent back in August 2015 for writing directly on a stylus-sensitive side panel. The copyright came to light recently and was believed to be a feature for the sequel to the Galaxy Note Edge. However, it could just as easily be incorporated into the Note 7 going by the newly leaked teaser.

Rumors so far indicate that the Galaxy Note 7 will sport curved edges on both its front and back panel. The handset may also feature an iris scanner and IP68 certification for protection against water spills and dust attacks. Other top specs include a 5.8-inch super AMOLED QHD screen, 12MP main camera, Snapdragon 823 processor, and 6GB of RAM.

The Samsung Galaxy Note 7 is expected to make its debut in August. We’ll keep you updated on any developments regarding the handset till then.