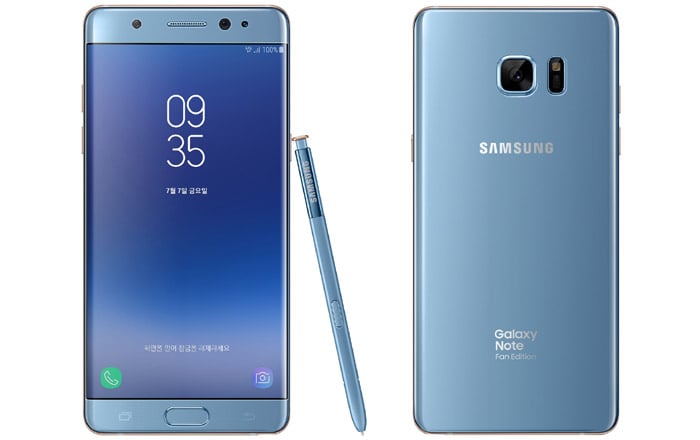 Samsung has officially brought back the Galaxy Note 7 under the guise of the Galaxy Note Fan Edition. The latter is a bit of a zombie as it’s been constructed out of unused parts of the former, with the brand touting this as an eco-friendly initiative.

The Galaxy Note Fan Edition will hit stores in South Korea on July 7 priced at KRW 699600 (approx $611 or Rs 39510). That’s about 30% cheaper than the fire-prone original. The difference may or may not be enough of a reason to convince people to buy the handset, especially given the fear that it could explode at any time.

Samsung is trying to reassure consumers by stuffing the smartphone with a smaller 3200mAh battery which has gone through its newly-enforced safety test. It’s also gotten updated with the same software that runs through the veins of the Galaxy S8, including Bixby support.

The timing for the Galaxy Note Fan Edition is a bit odd considering the Galaxy Note 8’s launch is just a few months away in August or September. Only past Note 7 owners who can’t stand not having the phone will probably pick this up, plus anyone who’s willing to risk burns for a discounted former flagship phone.

Samsung says that it’ll sell 400000 units of the Galaxy Note Fan Edition initially. Sales outside South Korea will be decided later. The company had previously confirmed that it won’t be bringing the phone to the US.