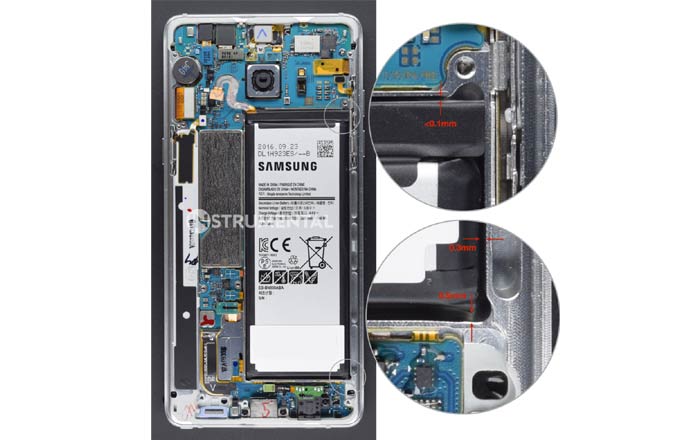 Samsung still hasn’t come out with an official reason for why exactly the Galaxy Note 7 was prone to explosions. Instrumental, an engineering tools and services firm, has conducted its own study into the matter to dig up the truth.

As it turns out, the batteries themselves were not at fault for the blasts. Instrumental believes it was an overly aggressive internal design which did the Galaxy Note 7 in. The outline basically compressed the battery even during normal usage. Batteries mechanically swell when charged and discharged, so it’s necessary to leave a certain amount of ceiling above the battery.

This is where Samsung’s design failed, since Instrumental’s two-month old unit had no ceiling to expand into. They claim that the battery and adhesive were 5.2mm thick and rested in a 5.2mm pocket when there should have been a 0.5mm gap.

This is key since the Galaxy Note 7’s Li-Po battery is of the flat ‘jelly-roll’ type which consists of a positive, negative, and separator layer. The last makes sure energy flows between the first two without them touching. If they do touch, it results in an inferno of heat which leads to an explosion.

Compressing the battery puts pressure on the separator layer. Samsung’s already admitted that the layer was thin from the start due to aggressive manufacturing parameters. Combined with the aforementioned swell and accumulated stress through the back cover, it’s possible the separator got squeezed to the point of explosion.

Instrumental posits that Samsung was trying to have the best of both worlds, attempting to balance maximum capacity while maintaining a thin profile and internal protection. There’s a chance the company’s manufacturing process kept changing throughout development so the newest versions of the powerhouses weren’t as rigorously tested as the first batch of samples.

Instrumental goes as far as to predict that the Galaxy Note 7 would have eventually been pushed apart by the battery swell a few years down the line anyway. The only way to have prevented the debacle would have been to stuff the phone with a smaller battery, though this would have pushed down battery life below the Note 5 and iPhone 7 Plus.