The last time we heard about the Samsung Galaxy Note 3 was just a week ago, but now a new rumor has cropped up suggesting that it may come with an LCD for a screen, which should give it better S Pen functionality. If true, this would be the first time such a display went into a smartphone-slash-phablet in the series.

The last bit of speculation regarding the Galaxy Note 3 brought us all sorts of specifications. That piece of gossip put it down to a 5.9-inch screen, but had it pegged as the AMOLED type. Of course, this wasn’t confirmed at the time, but was thought likely since the company has been leaning towards these screen options in a lot of its devices. 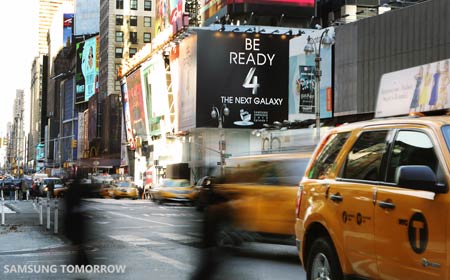 The GS4 is more or less only a day away from an official launch, but a host of other rumors like this one continue to stream out with SamMobile reporting that a well-placed insider has leaked a little information about the screen of the new Note device. And Samsung’s recent acquisition of stake in Japanese electronics manufacturer Sharp has been referenced. The source says Sharp’s LCDs are the best there are and the South Korean company will be looking to make the S Pen experience better.

Samsung currently uses a lot of OLED technology in its devices, and when probed on what would become of the existing AMOLED or PHOLED displays, the source suggested that the company would keep aside said displays for larger gadgets like tablets and high-end smartphones, presumably things that don’t need to function with a stylus.

Anyway, the signs of the next Galaxy device are everywhere, such as a flash (mini-)mob in the video above. The neon lights burn brightly even in Kowloon Peninsula, Hong Kong (pictured below). The hype has been ramped up ever so steadily over the last few weeks, with one spot even employing a child to build anticipation. 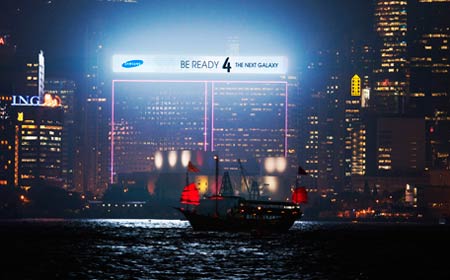 Whatever the Samsung Galaxy Note 3 eventually uses – whether it’s LED or LCD technology – it seems the company wants to give added functionality to the S Pen. But it should be noted that according to the rumor, a final decision on the screen is still pending. We’ll have to wait for something more official to be completely convinced though.