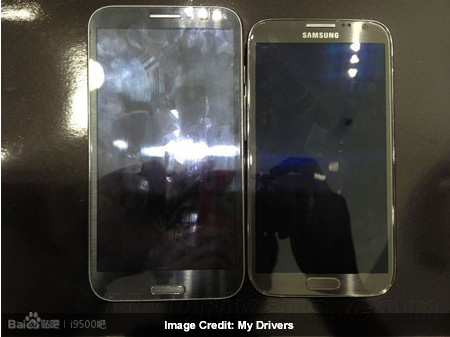 A fresh picture of what is being claimed to be the Samsung Galaxy Note 3 resting besides an S4 handset has seen the light of the day, leading many a speculators to get their tongues wagging. The source of this photograph is a Chinese site called My Drivers, and the said portal has even listed out some core specifications of the phablet. But the catch here is that speculations from past rumors don’t quite seem to match those in this one.

The report states that a 5.9-inch Full HD display will be making its way onto the handset, yet it doesn’t reveal anything about what kind of a screen it will be. Earlier this year, we had got word that the upcoming smartphone might be preparing to be equipped with a plastic OLED display. And prior to that, it was being said that the company’s stake acquisition of Sharp will result in an LCD screen being granted to the phablet with a view to provide it with improved S Pen functionality.

Moving our focus on the internals of this phone, it can be noted that an Exynos 5410 Octa chipset with an A15 processor clocked at 2GHz will be present within it, according to claims made by the Chinese website. That’s not all; a whopping 3GB RAM will apparently form part of the whole setup.

Since many are expecting this device to be launched in or around September, it was believed that it might just ship with Android’s Key Lime Pie version which will have been released by then. But the latest report says that this won’t be the case, and that the device will house Jelly Bean in its 4.2 form.

A suspicion bit has also been brought to the fore by this new rumor. As SamMobile has noted, there’s no ‘N’ in the model number of the phone which has been embossed on the photograph in question. All devices from the series have followed the ‘N’ nomenclature, but the absence of the said letter from this phone’s purported model number has definitely raised a doubt.

Lots of other Samsung Galaxy Note 3 speculations can be expected now that the rumor mills have got going. So stay tuned for more of them.