The Samsung Galaxy Note 3 Lite SM-N750 has been making headlines for a while now, but we are yet to hear an official confirmation from the company regarding the variant of the latest generation phablet. However, its source code with quite a few of its specifications has been unearthed through the Samsung User Agent Profile.

The wap.samsungmobile.com website clearly mentions that the details are of a certain device that has the model number SM-N750. Just like the original gadget, the variant is also likely to accommodate a 5.7-inch touchscreen on the front panel. But this screen cannot render visuals in full HD resolution and users will have to make do with a 1280 x 720p display. Dual cameras can also be expected with the gadget. 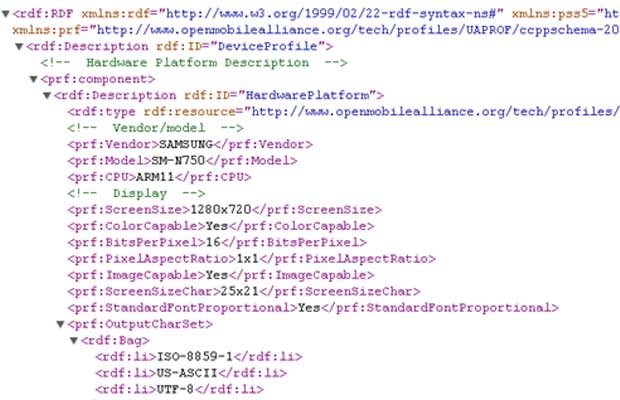 Its rear side will be graced by an 8MP snapper which will most probably be loaded with proprietary Samsung features, while the front should have a decent webcam for video conferencing purposes. The Android Jelly Bean 4.3 OS will power the Note 3 Lite and this should make it compatible with the Galaxy Gear watch.

Potential buyers may be a little disappointed to know that the device will not feature LTE support, however, grapevine is abuzz with speculations suggesting that another variant of the device called SM-N7505 will play well with the fastest data networks. A Mali-T626 MP6 GPU may sit within the confines of the phablet along with a 3200mAh lithium-ion battery too.

The Samsung Galaxy Note 3 Lite SM-N750 was spotted on the official website by the guys over at Cult of Android. It should be released at the CES or MWC 2014.