First the Galaxy Grand Lite and now, the Samsung Galaxy Note 3 Lite – The South Korean conglomerate is most likely to launch the Lite series of devices under the Neo brand. The latest leak has ‘confirmed’ that the toned down version of the company’s latest Note phablet will arrive with the said branding and alleged specifications of the handset have been revealed.

The latest information comes via internal product positioning documents which landed into the hands of GSMArena. According to the source, the device is more like a refreshed Note 2 since it boats of very similar specifications. The main difference between the two handsets which is also the most interesting component here is the processor. The documents indicate that the phone will sport a hexa core chipset. 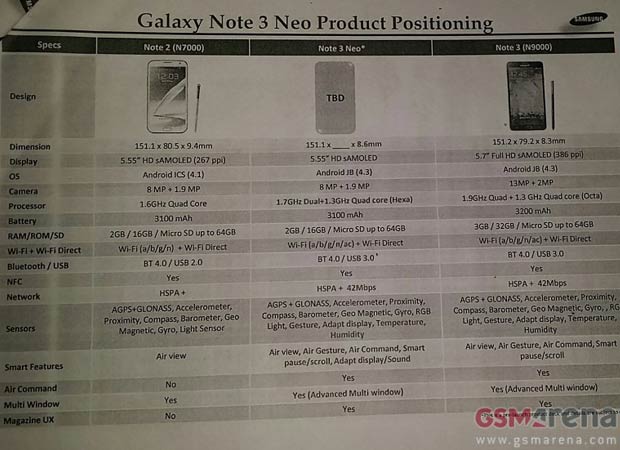 The Note 2 was launched with a quad core Cortex A9 based Exynos SOC, while the Note 3 Neo will feature two CPU clusters, a dual core 1.7GHz AP which is most likely based on the Cortex A15 and quad 1.3GHz Cortex A7 cores. Chances are high that this configuration won’t feature heterogeneous multi-core processing where both cluster work together simultaneously.

The Note 3 Neo will arrive with a 5.55-inch Super AMOLED display, an 8MP rear camera, 2GB of RAM, 16GB of storage and a 3100mAh battery. Apart from the name, the device will share other features with the Note 3. The handset is said to have the same faux leather back cover as the original and various software enhancements including Air Command and Advanced Multi Window amongst others.

The leaked documents show no mention of a price or release date, but the MWC 2014 looks to be an ideal launch platform.