The Samsung Galaxy Note 3 is the newest smartphone from the South Korean giant, and while it was announced at the IFA sans any pricing information, we had managed to dig up its US pricing after much searching. We didn’t have to sift through that much for its UK price details however, for EE has offered all the needed information by means of a press release. The recent advent of 4G in the Queen’s land means that all the big carriers will be offering it with support for their super fast speeds.

Firstly, EE has revealed that the much leaked Samsung Galaxy Note 3 will go up for pre-order on its website on September 5. It stopped short of disclosing a proper release date though. Anyway, it will be made available by the carrier with its 4GEE service at £149.99 with a mandatory £41 monthly fee for two years which will offer a 2GB worth of data. And that’s not all; Orange and T-Mobile customers will also get 4G-ready versions of the device at £119.99 and £139.99, respectively, with both mandating two-year agreements for paying £42 a month. We’re still to hear anything on the matter from Three, but the carrier has confirmed that it will indeed be offering the handset. 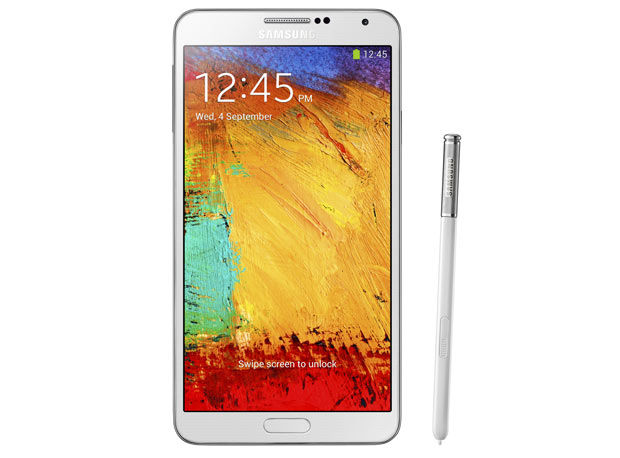 The Note 3 comes equipped with the Android 4.3 OS, and gains steam from either a 2.3GHz quad core Snapdragon 800 chipset or a 1.9GHz octa core Exynos Octa processor, depending on the region it is to be sold in. 32GB and 64GB are the storage options it will be furnished with, while 3GB worth of RAM and 3,200mAh battery also find their way inside it. The phone’s externals are highlighted by a full HD 5.7-inch Super AMOLED panel, a 13MP 4K-ready camera and an updated S Pen.

The Samsung Galaxy Note 3 was launched along with the Galaxy Gear smartwatch and a new version of the Galaxy Note 10.1 during the IFA in Berlin. Stay tuned for more news from the event.