The Samsung Galaxy Note 3 has been launched in India along with the Galaxy Gear smartwatch and the company has revealed that the devices will start shipping on September 25 in the country. Those interested in laying their hands on the phablet will have to fork out an exorbitant price of Rs 49,900 that’s just Rs 100 short of the Rs 50,000 mark, while the Gear will set users back by Rs 22,990. The company representatives have also revealed that its range of tablets will be graced by the Galaxy Note 10.1 2014 edition, slated to be unveiled sometime in October in India.

As of now, the Samsung Galaxy Gear only works in tandem with the Note 3 and it will operate seamlessly with the upcoming Note tablet too. The Galaxy S4 and the Note 2 are some of the few high end devices which will be compliant with the accessory very soon. This compact gadget that has already hit pre-order status in the US via various carriers, flaunts a 1.63-inch Super AMOLED touchscreen, a 1.9MP camera, noise cancelling microphones, a speaker and much more. It is compatible with a range of proprietary applications and even comes pre-loaded with a few of them. 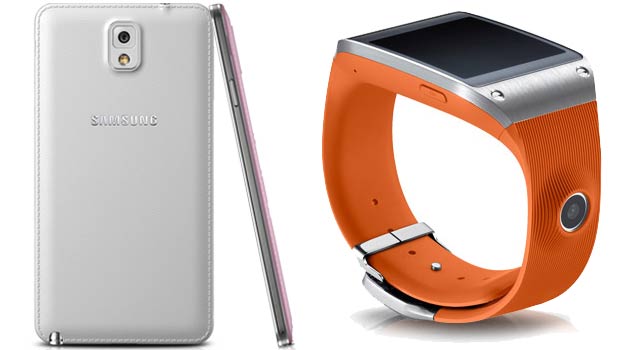 As for the Galaxy Note 3, the phablet featuring a 5.7-inch Super AMOLED FHD touchscreen, sports a 13MP snapper as well as a 2MP webcam. The Android Jelly Bean 4.3-based smartphone runs a 1.9GHz octa core processor and its quad core LTE version will not be released in India. It boasts of 3GB of RAM, 32GB onboard memory with an option to increase it further by up to 64GB and a 3,200mAh battery amongst a number of other things.

Both the Samsung Galaxy Note 3 and the Galaxy Gear smartwatch are already available for pre-booking through the eStore in India.