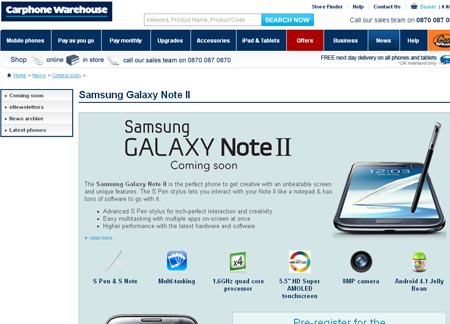 The Samsung Galaxy Note 2 release date in the UK is now official. This comes just a few days after the tablet-smartphone hybrid was confirmed to land in the US through major network operators including U.S. Cellular, Sprint and T-Mobile.

Starting from this coming Monday, fans in the UK will be able to stroll into the Samsung Brand Store at Westfield and drop the change for the Galaxy Note 2. It will also be out through all the big players including Carphone Warehouse and Phones 4u. The former retailer has only put up a page for the smartphone so far.

“The introduction of the original Galaxy Note was a great success – we succeeded in creating an entirely new category and went on to sell more than ten million devices globally. With the Galaxy Note II, we’re not only expanding the category, we’re also evolving the technology to the point where it genuinely feels as though you’re using a traditional pen and paper,” cited Simon Stanford, VP, UK & IRE Telecommunications & Networks Division, Samsung UK and Ireland.

“What’s more, it’s a device that everyone can use – whether that’s a fashion designer drawing a new design, or young professionals using the multiscreen and pop-up features to edit a document, send an email and browse the web – all at the same time,” continued Stanford. 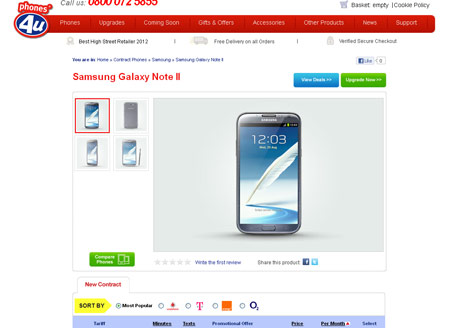 On the other hand, Phones4u is already accepting pre-orders for the Note 2 along with Orange, O2, T-Mobile and Vodafone. The price for the Samsung Galaxy Note 2 ranges from anything between zilch to £99.99 and upwards depending on the scheme selected by customers.