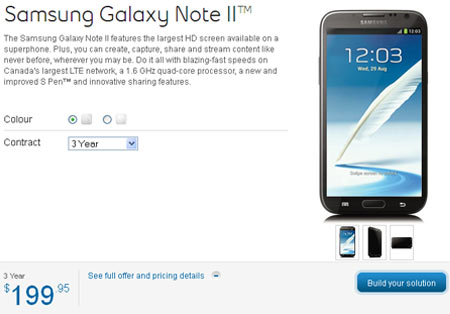 The Samsung Galaxy Note 2 has made its debut in Canada and its price is out through Bell and Rogers, as was announced by the South Korean manufacturer about a week ago. A number of other carriers like Telus, Wind Mobile and Mobilicity are yet to assign a release date to the hybrid device.

The Samsung smartphone which is already available in countries like the UK, the US and India, flaunts a huge touchscreen spanning 5.5 inches. This HD Super AMOLED display projects images in 1280 x 720p resolution. The phone weighs approximately 180 grams and is accompanied by the S Pen stylus for input flexibility. A number of S Pen-compatible applications have also been pre-loaded on the device. 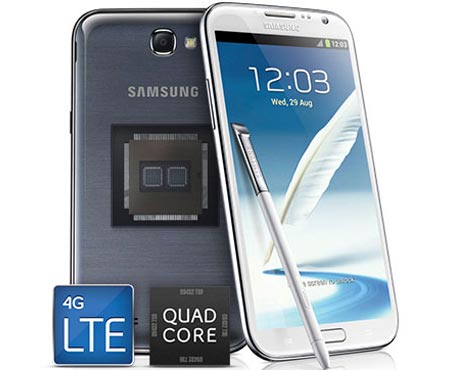 Armed with a 1.9MP front-facing webcam, the handset boasts of an 8MP primary snapper possessing attributes like auto focus, LED flash, a BSI sensor and more. A quad core processor running at a speed of 1.6GHz is responsible for ensuring smooth multitasking and relatively fast web access besides improved graphics. It binges on the Android Jelly Bean 4.1 platform garnished with the Samsung TouchWiz user interface.

The Wi-Fi-enabled 4G LTE Note 2 comes with 2GB of RAM and 16GB internal memory to go with it. Users have the option to increase the storage by up to 64GB with a little assistance from a microSD card. A 3100mAh lithium-ion battery keeps the slab charged for uninterrupted talk time of up to 21.62 hours. 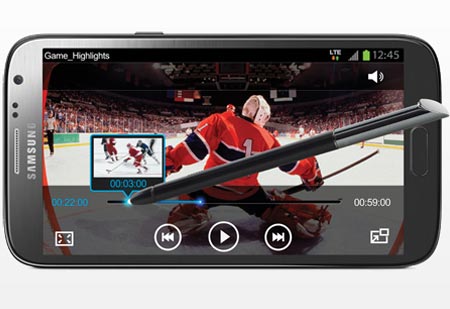 The Samsung Galaxy Note 2 can be picked up for $199.95 with a three-year contract and data plans through Bell and Rogers. Its unlocked version costs $649.99.