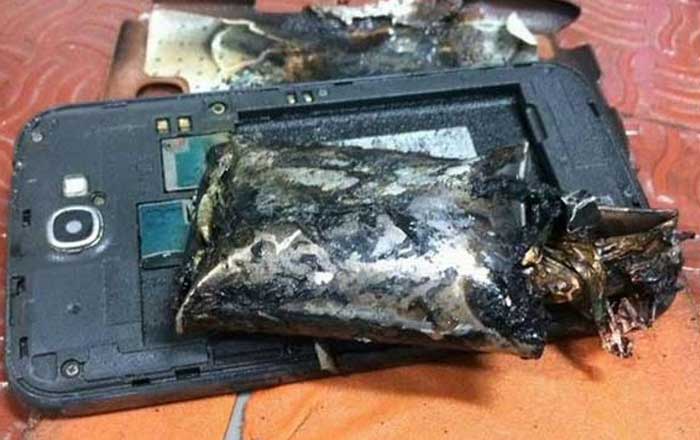 A routine flight from Singapore to Chennai quickly turned into a nightmare for its passengers when a Galaxy Note 2 caught on fire even as the plane was still in the air. While the aircraft managed to land safely without anyone coming to harm, the ordeal is only just beginning for Samsung.

The incident began when people on an IndiGo flight noticed a smoke smell coming out of the cabin and alerted the airline crew. The staff pinned down the source of the smoke to the hat-rack of seat 23C, following which the pilot alerted the ATC about the situation.

After relocating passengers, the crew observed smoke being emitted from a Samsung Galaxy Note 2 which was stuffed inside a passenger’s baggage in the overhead bin. The handset reportedly went up in flames after its battery exploded. In a statement, Indigo said its staff discharged a fire extinguisher and placed the burning device in a container of water.

The exploding Galaxy Note 2 in question is now being investigated by the Directorate General of Civil Aviation (DGCA). The authority had previously banned individuals from switching on or charging their Galaxy Note 7 while on-board. It’s now asking all airlines to prohibit the use of the entire Note series on a flight.

The DGCA has also summoned Samsung officials to discuss the issue on September 26. According to PTI, the latter is going to issue a fresh advisory regarding its products and has asked airlines to counsel passengers to switch off their Note handset while on a flight.

No official reason for the fire has been revealed as of now. There’s a chance the battery in the Galaxy Note 2 was a cheap knockoff, a common reason for such explosions. Samsung is probably hoping that’s the case since its brand probably won’t be able to survive yet another disaster on the scale of what’s been happening with the Note 7.