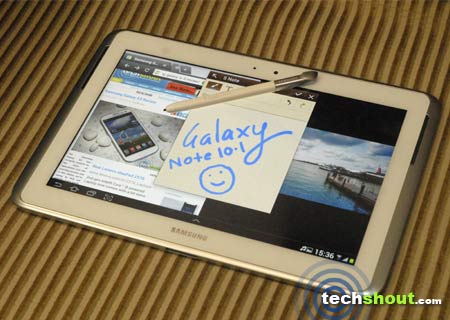 Today’s agenda – a full-scale review of the Samsung Galaxy Note 10.1. The tablet version of the original Note handset or phablet (phone plus tablet) as some prefer calling it, also comes with cellular support. The device in question has already debuted around the globe and it’s also known by the model number GT-N8000 or the Note 800 moniker. Read on to know how well this slab performs.

The Samsung Galaxy Note 10.1 is the second Android device and the first tablet from the company to house a quad core processor. The latest addition to this lineup is the Note 2 that’s expected to launch this October, but let’s leave that out for now. Here’s a quick run through of all hardware components fitted within this beast – the SOC employed here is the company’s own Exynos 4412, a quad core chip based on the ARMv7 processor with clock speeds of 1.4GHz. Backing it up is 2GB of RAM and the Mali 400MP GPU, while the integrated memory capacity amounts to 16GB, out of which approximately 12GB is user-available. There’s also a microSD slot supporting up to 32GB. Visuals are delivered through a 10.1-inch WXGA 1280 x 800p HD Super AMOLED touchscreen.

A primary 5MP AF snapper is embedded onto the rear with LED flash and 720p video recording. For self-portraits and face-to-face chatting, there’s a 1.9MP camera on the front. Where connectivity is concerned, you’ll have access to EDGE and HSPA+ 21Mbps networks through the built-in SIM card slot. Apart from this, the slate packs in Bluetooth 4.0, Wi-Fi 802.11 a/b/g/n as well as A-GPS in the 3G version or S-GPS in the Wi-Fi version. There are several software-related connectivity features as well, including AllShare Play and AllShare Cast. The Ice Cream Sandwich platform runs the show and the company has even promised an update to Jelly Bean in the near future. Finally, powering up this piece of hardware is a 7,000mAh Li-ion battery. 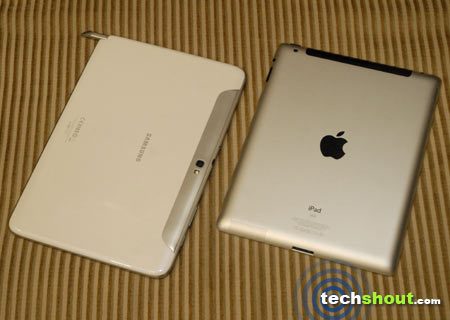 The innards of the device are quite appealing and they stand tall against various modern tablets. And now it brings us to the question – does the device fair well in terms of design? The answer to that is yes and no. We’re certainly pleased with various aspects, but there are some features in the form factor which fall short compared to what we anticipated this 10.1-inch beast would be. For starters, it feels really fragile, courtesy of the all-plastic design – or maybe the body is crafted from polycarbonate like the Galaxy S3. Samsung still has to confirm this though. Landing a few scuffs on the surface isn’t a hard task if you’re not careful. And don’t let press images fool you – the thick silver bezel running around the edges isn’t made of aluminum nor hard metal as it may appear. Rather, it’s crafted from the same material which fills up the rear and the bezel around the display. Our review unit arrived drenched in white and the company is even offering it in a shade of black. Not much of an option, is it?

Coming to the design aspects we really like about the Galaxy Note, it has a lightweight build making it highly portable and convenient to carry around. At 600 grams, this 8.9mm tablet is a tad lighter than the 662-gram third generation iPad. The Wi-Fi-only version of the slab in question tips the scales at 597 grams. Based on the placement of external components which comprise of a power button, volume controls, a microSD card slot, an IR transmitter, a 3.5mm audio jack and a SIM card slot, the device appears to be built specifically for landscape use. While these buttons and ports are situated on the top just above the front-facing camera, the S Pen housing is placed on the lower right corner. You’ll also find an Apple-inspired dock connector for charging and USB connectivity, in place of a micro-USB slot. Lastly, the company has thrown in a set of stereo speakers, one placed on each side of the touchscreen. Flip over to the rear and you’ll be presented with the primary camera. 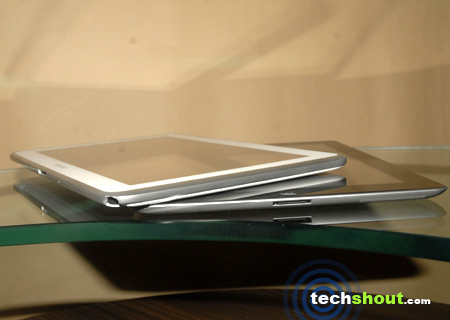 Well, the Samsung Galaxy Note 10.1 may not have been given the premium design we expected, but the South Korean conglomerate has done a fabulous job on the performance front. The device starts up in less than 15 seconds with the SIM and microSD cards mounted. And with the hardware the tablet packs in, you can be sure it will run almost any application or game available through the Play store. For a bit of enjoyment, we threw in GTA III which worked flawlessly, and Riptide GP that’s high in detail. Using motion based controls on a 10.1-inch slate, however, isn’t the sort of enjoyable task you might imagine. And if benchmark results matter to you, the device scores 4658 on Quadrant Standard Edition, 12443 in AnTuTu Benchmark and 1221.6ms in SunSpider JavaScript benchmark (here lower is better), while the Vellamo application rendered 1570 in HTML5 and 548 in Metal (CPU benchmark) tests.

Multitasking – Where Samsung gets it right:

We’ve heard manufacturers call their tablets portable computers with ‘high multitasking’ capabilities time and again, but it’s only now that we’ve laid hands on the slab that we’ve experienced PC-like multitasking. In short, it’s dream-like. You can run 2 apps simultaneously in a split-screen view, although this ability of accessing applications side-by-side is currently limited to certain pre-loaded tools such as Polaris Office, S Note, Video Player, Gallery and Email. Anyway, it puts all that excessive RAM to good use. Coming to responsiveness, navigation through the touchscreen is smooth and the S Pen works like a charm. It’s better than the stylus included with the Lenovo ThinkPad, hands down. On the downside, we did experience a few lags here and there, mostly in the music player application whilst scrolling through tracks, 1,500 of them to be precise. So yes – even with a quad core processor and 2GB of RAM, you may still encounter a few lags in the UI. 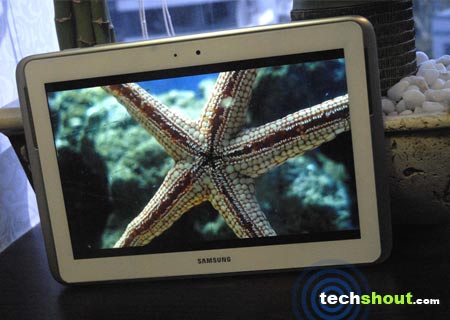 A taste of Ice Cream Sandwich with a spread of TouchWiz:

At first, the interface is just your everyday ICS experience, but that’s only until you get a load of the tweaks the company has to offer. If you’re an existing Android user, you’d probably know how hard it is to capture screenshots straight from your device. Well, the guys over at Samsung know about the hassle as well. And the outcome is a dedicated screenshot button located just besides the on-screen ICS keys, which can be used from almost any application. Additionally, a small arrow that’s centered on the bottom of the UI provides quick access to certain functions like a mini phone dialer, S Note window, Alarm, Calculator, email, task manager and so on, which appear in a widget-like layout. Clicking on any one of these brings up a floating window that can be used over practically any app without the need to exit it. And the moment you slide out the S Pen from its housing, a shortcut panel shows up from the right with a list of tools optimized specifically for the stylus.

Entertainment and the little extras:

As we explained earlier, the Note tablet faces no difficulties when it comes to gaming. And the same applies on the entertainment front. The display employed proffers an HD resolution of 1280 x 800 pixels portraying crisp and clear visuals. But the question that bothers us is, ‘Can this slate match up to the competition which offers a bit more in pixels?’ The latest iPad has a resolution of 2048 x 1536p and the Asus TF700 packs in a full HD screen as well. If the device in question is considered to be the company’s latest flagship slate, it seems that they’ve really not treated it as one. That being said, video playback isn’t a tedious task for the slab and we even managed to get various popular formats including MKV to run without any hassle. 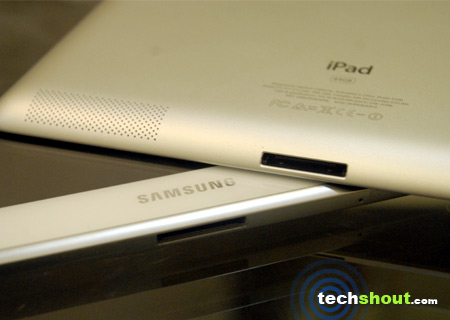 If you’re constantly on the move, there’s one important thing you ought to know about the Samsung Galaxy Note 10.1 – the screen has poor outdoor visibility even when set to full brightness. The company has thrown in an IR transceiver which is complemented by the Smart Remote application, allowing you to control various devices around the house, just like the one we’ve seen in the Sony Tablet S. In addition to this, there’s a host of other apps included right out of the box. Firstly, you get for free, the Photoshop Touch tool which retails for $9.99 on Google Play. Along with Video Maker and My Education which allows you to watch free videos, read books and also purchase study material online, you’ll also get a taste of S Suggest which has a good set of application recommendations, and S Note. 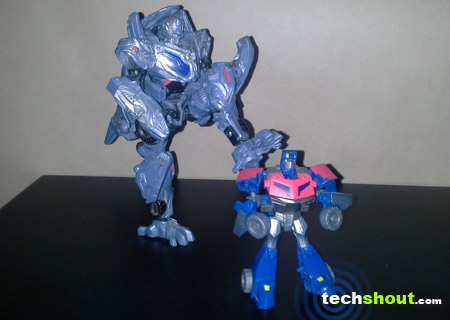 When a device exceeds your expectations in a certain field, hopes of it being ‘awesome’ in possibly everything else start to rise. And this has been precisely the case with the Note tablet. So here’s another addition to the disappointing bits – the camera. Outdoor images appear clear, but the snapper just can’t cope with the task of delivering quality stills through its 5MP camera in low-light conditions. While the LED flash doesn’t provide much of a helping hand, images rendered here are grainy and blurred most of the time. If these aren’t enough, video recording is limited to 720p resolution only. One noteworthy feature implemented here is Outdoor Visibility which improves color and exposure levels while recording and capturing pictures. 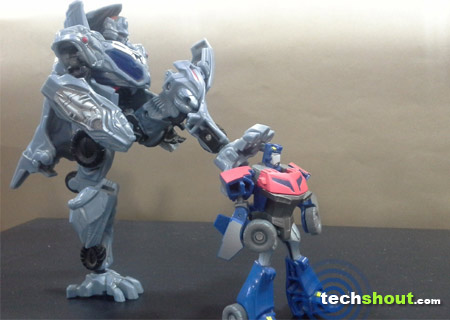 There’s no HDMI port here, but the company has added MHL support through a dedicated MHL/HDMI adapter.

Owing to the slate’s lightweight design, it’s easy to carry the device around and even comfortably hold it in one hand.

The device doesn’t compromise on performance. And multitasking is a step closer to a true PC-like experience.

A mediocre quality form factor is what Samsung has delivered here and the design doesn’t feel as premium as it looks. The same applies to the S Pen stylus.

The company has dropped NFC from the tablet’s blueprint.

The image capture quality of the rear camera isn’t close to what we expected. And why is it that this ‘premium’ device with high-end specifications only records videos in 720p HD?

We’ve already said everything we need to about the Samsung Galaxy Note 10.1, but there’s still one major factor remaining to detail out – its battery life. The tablet managed to pull through for over 7 hours of usage which includes an active Wi-Fi connection, simultaneous web browsing, music playback and Photoshop editing, apart from a series of benchmark as well as performance tests. All-in-all, we’ve had a stupendous experience and we’re giving this piece of hardware an 8.5 out of 10. Potential buyers in the US can pick up the 16GB and 32GB Wi-Fi only versions for $499.99 and $549.99, respectively, while buyers in India will have to shell out Rs. 37,900 for the 16GB 3G variant.