Samsung Galaxy Note 10.1 now available in the US, we sigh with relief 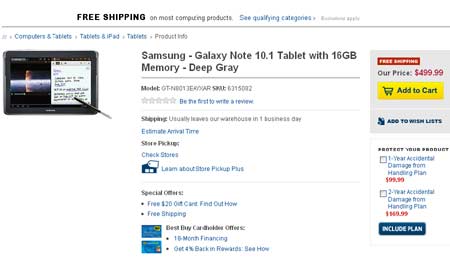 After months of speculation and an official announcement of arrival keeping potential buyers hanging with no specific release details, the Samsung Galaxy Note 10.1 has finally landed in the US. Those who were hesitant about picking up a unit through Negri Electronics may feel a little more willing to now get the 16GB Wi-Fi version which sells for $499.99.

The key components beneath its 10.1-inch WXGA 1280 x 800p LCD include an Exynos quad core processor operating at a frequency of 1.4GHz, 2GB of RAM for smooth multitasking, options of 16GB or 32GB built-in storage and a microSD card slot supporting up to 32GB of memory. Let’s not forget the ICS platform and the 7,000mAh Li-ion battery that powers up the above-listed hardware.

“Our goal with the Samsung Galaxy Note 10.1 was simple – redefine the tablet experience,” comments Tim Baxter, President, Samsung Electronics America. “The S Pen offers both active content creation as well as passive content consumption, while the Multiscreen capability finally enables true multitasking. For the user, the resulting experience is completely new and quite unexpected.” 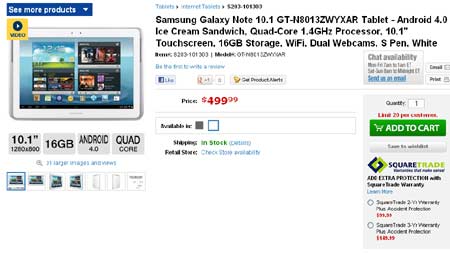 The device is built around dimensions of 262mm x 180mm x 8.9mm and weighs approximately 597 grams. It incorporates dual cameras, a 5MP one on the rear featuring AF and LED flash as well as a 1.9MP snapper for self portraits and live video chats. Potential users will have choices of white or dark gray shades.

As mentioned above, the Samsung Galaxy Note 10.1 price in the US sums up to $499.99 for the 16GB version, while the 32GB variant retails for $549.99. The tablet is available for purchase through Best Buy, Amazon, Tiger Direct, HH Gregg, CDW, BrandSmart, Conn’s and Fry’s.