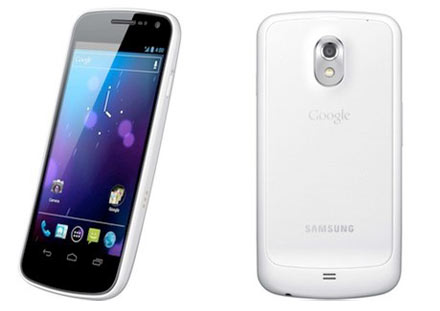 The flagship Ice Cream Sandwich handset will soon be seen arriving in a new color, as the white Samsung Galaxy Nexus was announced by the company yesterday. In this pristine hue for the U.K., the smartphone will be made available in the region starting February 13, 2012.

Barring the body color, no other new features are likely to be found among the hardware or software specs. As fans might know, it comes embellished with a 4.65-inch HD Super AMOLED display that throws out a resolution of 1280 x 720p. Running on a 1.2GHz dual core processor, the device also dishes out HSPA+ connectivity. Accompanying its 1.3MP front camera, is a full HD, 1080p capable 5MP snapper with LED flash. Measuring in at 135.5mm x 67.9mm x 8.9mm, the Galaxy Nexus tips the scale at 130 grams.

Simon Stanford, UK and IRE Telecommunications and Networks Division, shared, “After much speculation, we are pleased to announce the availability of the Galaxy Nexus White which follows the great reception the phone has received since it was launched back in November. One of the things we at Samsung pride ourselves on is the choice we offer customers, and we’ve enjoyed huge success to date by introducing white variants of our most popular models to our product portfolio.”

Memory options for this device include 16GB and 32GB models. But those wanting to increase the storage further can drop the idea, as it does not support any kind of memory expansion. Other traits that are on offer through the smartphone include Bluetooth 3.0, Wi-Fi b/g/n as well as a microUSB slot.

Slated to turn up at retailers in the U.K. on February 13, the white Samsung Galaxy Nexus is expected to bear the same price tag of £459.99.