Samsung’s irritatingly patronizing, girly La Fleur collection already got a refresh early this year. But there’s more to come before Christmas – the Galaxy S4 mini is apparently all set to join the parade in a shade of red.

The La Fleur edition of the S4 mini may see Samsung put its usual spin of flowery patterns on the back panel of the phone. There’s always the possibility of the company adding some of the decorations to the bezel framing the screen too. 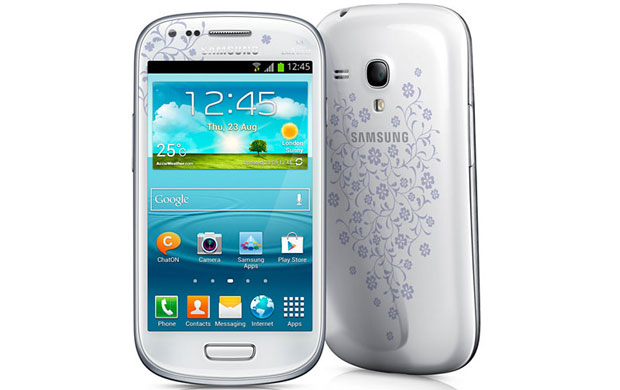 Not much in terms of software is likely to change on the phone as compared to the standard mini S4 version. At the most, personalization options like wallpaper, themes or pre-loaded ringtones and such could be different.

And we know about the ‘floral sticker stamps’ for the ChatOn messenger service which were tied to this La Fleur collection. The hardware specifications cover a 4.3-inch 540 x 960p resolution touch display and a 1.7GHz dual core application processor.

Also onboard are 8MP and 1.9MP cameras, 8GB/16GB internal memory and up to 64GB microSD card support. The Galaxy S4 mini is compatible with 4G LTE/GSM/GPRS/EDGE/HSPA+, NFC, DLNA and Wi-Fi. Its 1900mAh battery renders up to 9 hours of web browsing on 3G networks.

The smartphone originally touched down with Jelly Bean 4.2.2 as its OS of choice. The source of the story, SamMobile, has its fingers crossed for version 4.3 of Android on the phone however.

Samsung has yet to make an official announcement about the rumored La Fleur collection for Christmas shoppers. So details about the price and markets in which it will be released are MIA.