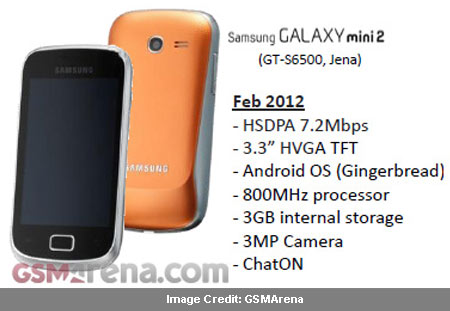 The Samsung Galaxy mini 2 S6500 handset has been found in the wild and apparently, it is seen as a successor to the Mini S5570. The leaked specifications indicate a mid-range device of sorts which may cater to beginners moving from feature phones to smartphones. The T-Mobile Vivacity, the Nokia Lumia 710 and Samsung Galaxy Y Duos are some of the other options that could possibly serve just as well.

Supposedly codenamed Jena, this fresh Galaxy mini is expected to arrive with a HVGA 3.3-inch screen in tow. The rear panel of the device should come embedded with a 3MP snapper. It may be seen proffering the 7.2Mbps HSDPA connectivity option as well. Furthermore, the gadget will probably come fueled by an 800MHz chip with 3GB of onboard memory to save multimedia content. As far as the design is concerned, Samsung fans may be quick to compare it to many of the company’s previous offerings. Rounded at the corners, this smartphone will feature a home button at the lower end of its chassis.

According to GSMArena, the offering will bring in the taste of Gingerbread amongst other detailed features which are still under wraps. In addition to the aforementioned specifications, Samsung’s service titled ChatON may also make its way onto the device so that users can stay connected with their family and friends when on the go.

The Samsung Galaxy mini 2 S6500 release date and price specifications have not been spelled out by the company. But the device is expected to make an appearance this month at the upcoming MWC.