Samsung Galaxy Mega 6.3 is reportedly headed to AT&T in the US

The Samsung Galaxy Mega 6.3 that was launched back in April, seems to be gearing up to arrive in the US via AT&T. Neither the carrier, nor the South Korean company has revealed anything about the Samsung phablet’s availability details, but its press shot that clearly shows the service provider’s logo has popped up on the web.

@evleaks, which recently tweeted a picture of the whitewashed AT&T-bound LG Optimus G Pro, got its hands on the Galaxy Mega 6.3’s image. As the name suggests, the gadget offers a multi-touch real estate of 6.3 inches and its Super Clear LCD HD display is said to be capable of delivering visuals in 1280 x 720p resolution. The handset crammed into an exterior measuring 167.6 x 88 x 8 millimeters, sports a 1.9MP front-facing camera and an 8MP rear snapper with features like LED flash and auto focus amongst many others. It has also been fitted with an accelerometer, a digital compass as well as luminance, hall, gyro and proximity sensors. 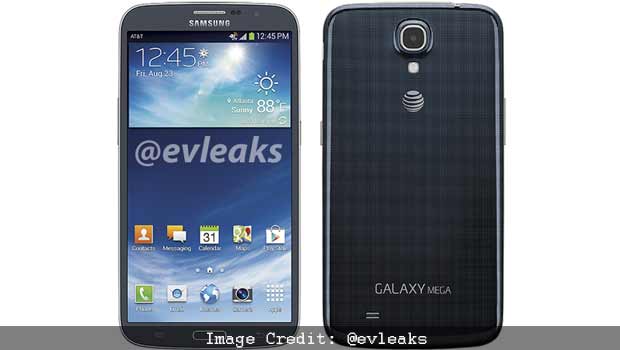 The internal working of the Samsung Galaxy Mega 6.3 is carried out under the supervision of a dual core application processor ticking at 1.7GHz. It accepts a micro SIM card and has an expansion slot for allowing users to increase its storage by up to 64GB using a memory card. And what’s more, the phablet hides a 3000mAh battery under the hood which coughs up the juice for talk time of about 17 hours and standby time of around 420 hours in the 3G mode.

As none of the companies have gone on record to confirm the Samsung Galaxy Mega 6.3’s arrival through AT&T, we are not sure exactly when this version of the gadget will drop anchor in the US.