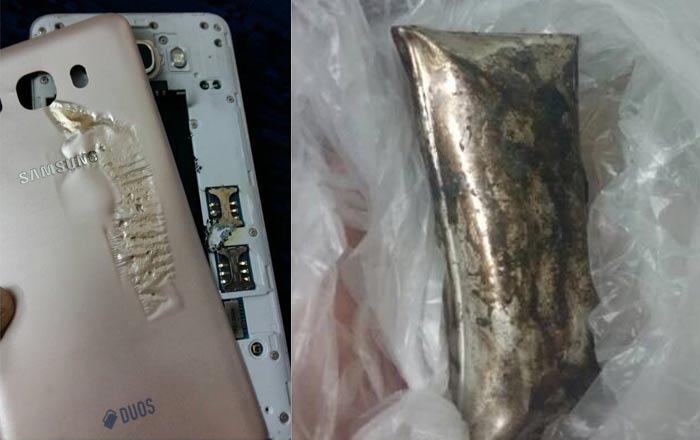 Samsung’s currently in the midst of preparing to bring back the fire-prone Galaxy Note 7 as a special refurbished Fan Edition (FE) model. In what can be seen as terrible timing for the brand, one of its phones apparently exploded in the hands of a 4-year-old.

The phone in question is not the Galaxy Note 7, but a Galaxy J7 (2016). As per ValueWalk, a Pakistani mother named Naureen Ahsan recently shared images of her daughter’s charred device within a Facebook group. It seems her young 4-year-old nephew was playing My Talking Tom on it when it suddenly overheated and blew up.

Luckily, no one got hurt in the blast. Both Ahsan’s nephew and daughter escaped without any harm, but the incident naturally terrified everyone involved. She’s now advising people to keep their children away from mobiles. As for why the Galaxy J7 went up in flames, she thinks it could have come about because of overheating or lagging due to games.

Her Facebook post didn’t mention whether she tried to get in touch with Samsung to get to the bottom of the matter, though she did state that she was unable to share the above pictures on the brand’s page. This isn’t even the first time a J series phone has blown up in recent months.

In a similar incident which took place in November last year, a woman in France asked her son to pass her Galaxy J5 to her when she noticed that it was extremely hot and had smoke coming out of it. She proceeded to throw the smartphone to the ground where it caught fire and blasted open.