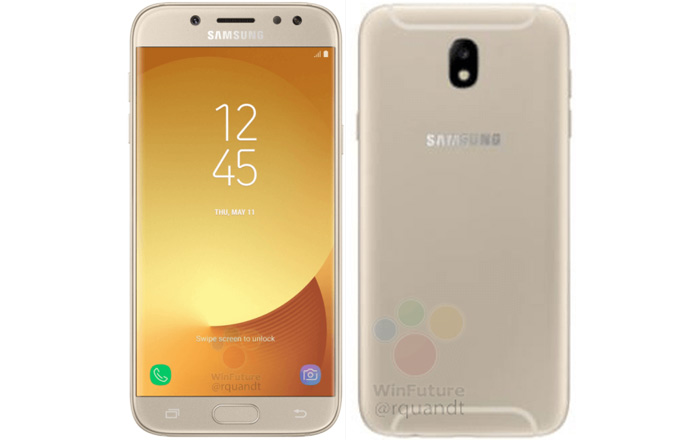 The Galaxy J5 (2017) and Galaxy J7 (2017) have just become the recipients of two separate leaks which reveal pretty much everything there is to know about the handsets. One covers its specifications, while the other features several press renders to showcase what it might look like.

Based on the images, Samsung is changing up the look of the Galaxy J5 (2017) and Galaxy J7 (2017) in a big way. Both are likely going to sport a metal unibody, an upgrade over the sole metal frame which its 2016 predecessors bore. The two look considerably more premium than the previous variants as well, adopting a more Galaxy A series look.

As for specs, a site called Tweakers has posted comparison charts for the Galaxy J7 (2017) and Galaxy J5 (2017) comparing each to its 2016 counterpart. The former could get a fingerprint scanner embedded onto its home button, 16GB of ROM, and a 5.5-inch super AMOLED 1080p display.

Other notable upgrades include LTE Cat.6 connectivity, VoLTE/VoWiFi support, and Android Nougat. As for the Galaxy J5 (2017), the handset will stick to the same 5.2-inch 720p panel as its 2016 model, but get updated with a 1.6GHz octa-core processor. Other features are mostly the same as the J7 (2017) except for its 2GB of RAM and 3000mAh battery.