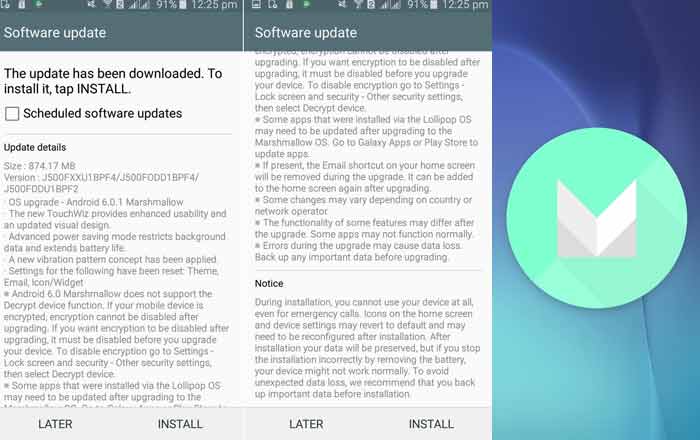 Samsung has officially begun rolling out the update to Google’s 8-month old Android 6.0.1 Marshmallow OS for the Galaxy J5 (2015). It looks like the brand is finally beaming out the upgrade to its affordable lineup after delivering the promotion to its more high-end offerings.

Given that both the Galaxy J5 (2015) and Galaxy J7 (2015) were released together about a year ago, Samsung will probably send out the update to Android 6.0.1 Marshmallow for the latter soon. The one for the former weighs in at 874MB and is currently being delivered OTA with the build number J500FXXU1BPF.

Samsung advises owners to back up their data before starting the process, in addition to disabling any encryption. Other than the major changeover to Marshmallow, the update will also bring a fresh TouchWiz interface to the device. It’ll apparently provide enhanced usability and an updated visual design.

A quick look at the specifications of the Samsung Galaxy J5 (2015):

You can manually check if your Samsung Galaxy J5 (2015) has gotten the upgrade to Android 6.0.1 Marshmallow by heading to Settings and peeking under About device for the software update.