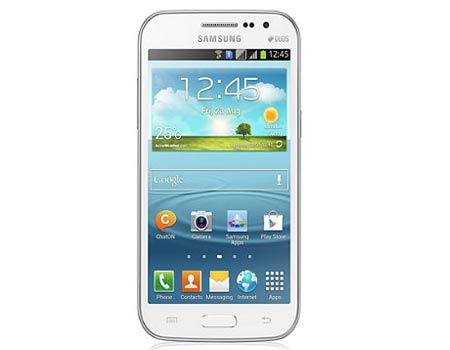 Samsung has launched the Galaxy Grand Quattro in India, which is a trimmed down version of the company’s mid-range 5-inch smartphone, bearing a quad core CPU onboard, with its price set at Rs. 16,900. Clearly, the South Korean conglomerate is not one to take a blow lying down after Micromax challenged its hold over the market with an affordable quad core Canvas HD.

Even so, the A116 isn’t the only competition that the Samsung Galaxy Grand Quattro faces in recent times. At least the manufacturer is back in the game with what can be considered a viable quad core device in the low-budget smartphone sector. Running at a speed of 1.2GHz, the phone’s integrated Cortex A5 processor is accompanied by an Adreno 203 GPU. 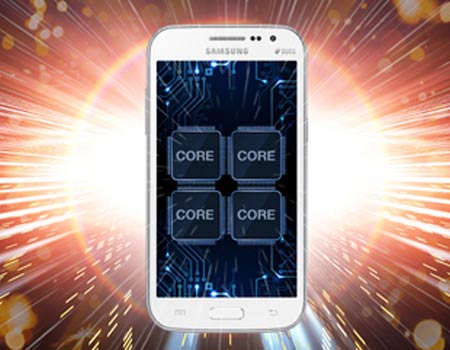 The 4.6-inch TFT display which can be spotted on the front panel shows off the TouchWiz UI at a resolution of 480 x 800 pixels. Catering to users’ video conferencing cravings is a VGA webcam which finds itself seated above the screen. The camera embedded on the rear panel features a 5MP CMOS sensor, autofocus and an LED flash.

The S3-like smartphone proffers no storage configuration options except 8GB. This however can be bumped up to 32GB by inserting a microSD card into the incorporated expansion slot. In addition to this, system memory of 1GB has been included as well. The handset draws power from a 2,000mAh battery which renders 3G users with talk time of up to 11 hours or roughly 210 hours of standby. 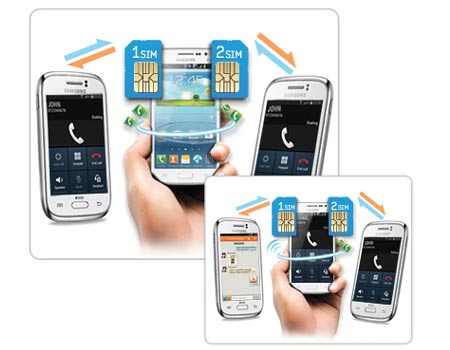 Apart from the manufacturer’s e-store, the Samsung Galaxy Grand Quattro has made its presence felt in other stores across India at a relatively lower price. Flipkart and Snapdeal have made the device available priced at Rs. 16,570, but the handset has struck Saholic at a higher amount of Rs. 16,750. Those interested should note that it has begun shipping in the traditional white color. 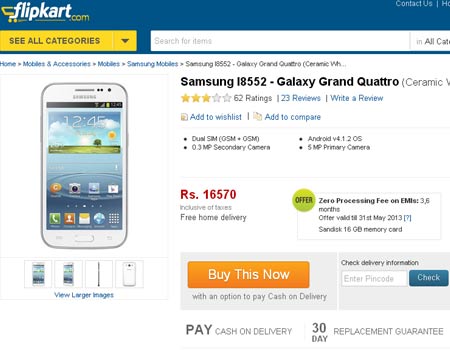