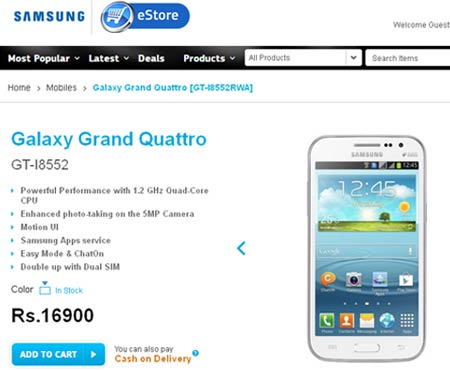 Samsung has confirmed the existence of the Samsung Galaxy Grand Quattro in India and has revealed the phone’s official price to be Rs. 17,290. It is currently available through multiple e-retailers as well as via the company’s eStore.

Those who decide to buy the Samsung Galaxy Grand Quattro from the eStore will be glad to know that it will be available for Rs. 16,900. And the online retailers such as Flipkart, Snapdeal, The mobile Store and Indiatimes amongst others are selling it for just Rs. 16,570. It plays successor to a dual core Android smartphone in this category and takes its legacy forward by employing a processor with 4 cores. 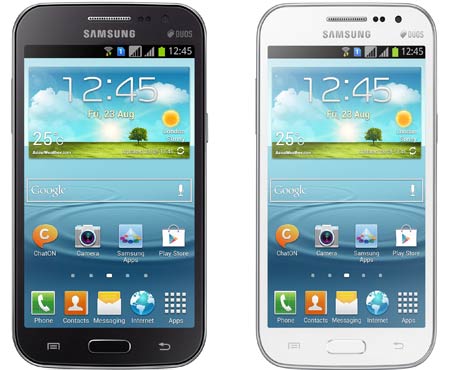 This quad core CPU ticks at a maximum speed of 1.2GHz and brings 1GB of RAM for company. An Adreno 203 GPU has also been integrated for ensuring enhanced graphics and the device’s ability to render clear visuals can be attributed to a 4.7-inch capacitive WVGA touchscreen of 480 x 800p resolution. Additionally, a VGA camera with a CMOS sensor has also been fitted on the front for facilitating video conferencing.

Another 5MP camera with common features like auto focus, LED flash and the ability to record videos, lays claim on the rear side. A 2000mAh battery rests snugly in the confines of the phone that measures 133.30 x 70.70 x 9.65 millimeters and weighs around 143 grams. It can cough up the juice for talk time of close to 11 hours and standby time of about 210 hours. 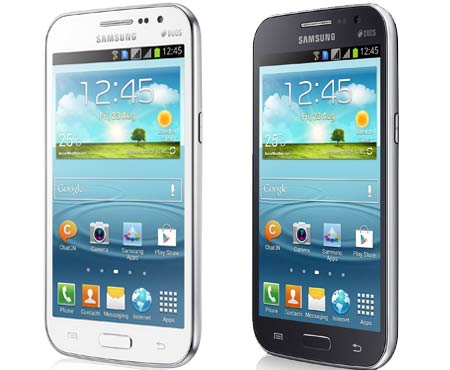 A key highlight of the Android 4.1-based Samsung Galaxy Grand Quattro is that it can support two SIM cards at the same time and even tags along an expansion slot for a microSD card of up to 32GB capacity. A USB port and a 3.5mm audio jack come in handy for tethering the handset to various peripherals. It goes without saying that common wireless communication options like Wi-Fi, Bluetooth and GPS have also been thrown into the mix.

The Samsung Galaxy Grand Quattro has officially come to India and is now up for grabs for the aforementioned price. 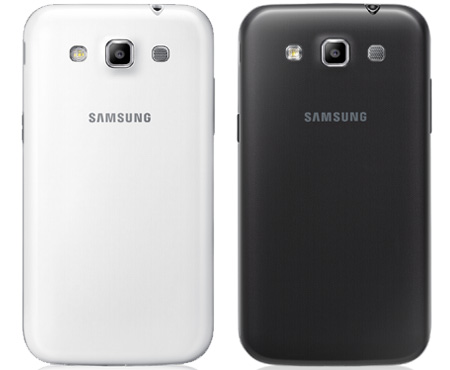