Samsung Galaxy Grand price in India gets a cut

The Samsung Galaxy Grand which was earlier selling at a price of around Rs 21,000 in India is offering a good deal, bringing the rate down to Rs 18,499. Without any official word from Samsung, e-retailers have slashed down its retail value out of the blue, delighting those who were hoping to buy the smartphone anytime soon. This dual SIM device should not be mistaken for its Quattro version that was released last month with slightly different features.

The Samsung Galaxy Grand had come out in the country in January this year, and it suited the market is such a way that it quickly became one of the most popular handsets to own. Its initial value was placed at Rs 21,500, but now that a cut has been introduced, it can be picked up at Rs 18,499 from Snapdeal. Saholic on the other hand, is offering it at Rs 18,799. Both Infibeam and Flipkart have maintained its MRP at Rs 19,500. 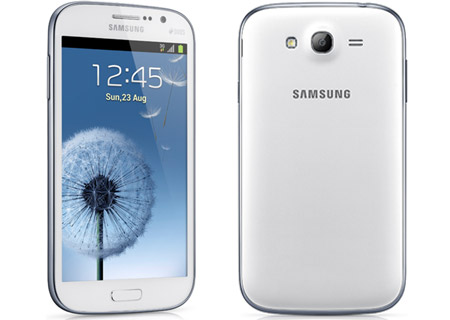 So what is it that that makes the Samsung Galaxy Grand click among buyers in the nation? It might be the fact that it’s S3-like looks and feel are being combined into a neat and cheap package which also bundles attributes such as a dual SIM facility which is in massive demand in the said market. Infused with version 4.1 of the Android OS, it of course carries on it the TouchWiz 4.0 users interface. A 1.2GHz dual core processor toils beneath its hood along with a 1GB RAM to provide the device with the needed power.

Its 5-inch capacitive touchscreen display grabs a resolution of 480 x 800 pixels. The internal memory of the Samsung Galaxy Grand has been tied up at 8GB, but a microSD card is present on it for further expansions of up to 64GB. The handset’s imaging attributes include an 8MP rear-facing camera and a 2MP front-facing one. The former comes with an LED flash and 4X digital zoom, and is capable of delivering 1080p videos at 30fps.

The Galaxy Grand can be snapped up now by interested parties at a lowered rate of around Rs 18,499.