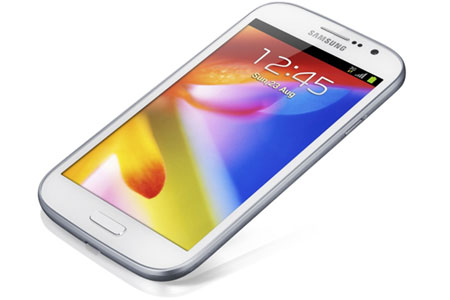 The Samsung Galaxy Grand, a new smartphone with a 5-inch touch screen, has been unveiled, but pricing and availability details are sketchy at the moment. Running Android 4.1.2 from the get go, the phone delivers to users a taste of Jelly Bean.

The device has a 5-inch WVGA TFT LCD display which is slightly larger than that of the S3’s own 4.8-inch screen with a resolution of 1280 x 720p. It seems positioned between the above-mentioned and ever-popular S3 and the Note 2, whose 5.5-inch screen is complimented by the S Pen. Furthermore, it weighs 162 grams and is compatible with EDGE and HSPA+ networks.

A post on the Samsung Tomorrow Global blog says that the phone’s operations are taken care of by a 1.2GHz dual core processor, but it doesn’t specify which exactly. As for running applications, that part is overlooked by 1GB of RAM. Internal memory amounts to 8GB, although all of it won’t be accessible to users. But it can be further expanded to 64GB via the use of a microSD card. 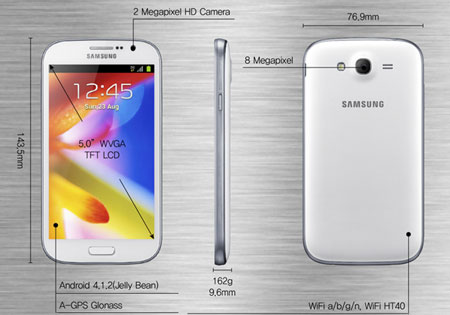 The Galaxy Grand also packs all of the company’s trademark features including S Voice, Direct Call, Smart Alert and Popup Video. Direct Call lets users call up a contact by simply lifting the phone to their ear and Smart Alert display calls that were missed and new messages received when the phone is picked up.

In addition, the handset features an 8MP primary camera on the back which boasts of an extremely quick start-up time and no shutter-lag whatsoever. It also has a backside illumination sensor for clearer stills in low light and can record video in full HD. Connectivity features such as A-GPS with GLONASS, Wi-Fi, Bluetooth 4.0 and DLNA support are brought along.

The smartphone also comes pre-loaded with the latest Samsung Hubs which delivers on-demand movies, music and videos to the user. It will be made available in 2 variants – dual and single SIM. The dual SIM version will be launched first with the single SIM model to follow.

No official mention on the availability of the Samsung Galaxy Grand has been made while the device’s cost likewise remains under wraps.