Word out is that Samsung has started seeding the Android 4.4.2 KitKat update for the Galaxy Grand 2 Duos handset in India. Since it’s one of the most popular smartphones in the country, the company has chosen this region as the starting point of the rollout which will soon enter other nations where the device is available.

Of course, all the main features from Google’s release of the software will be added by this update, but there will also be Samsung’s very own additions which come with its TouchWiz user interface. New traits include the album art display on the lockscreen as well as the camera shortcut on the lockscreen. According to a post on the XDA forum, this 361MB download will also introduce a fresh launcher settings menu. 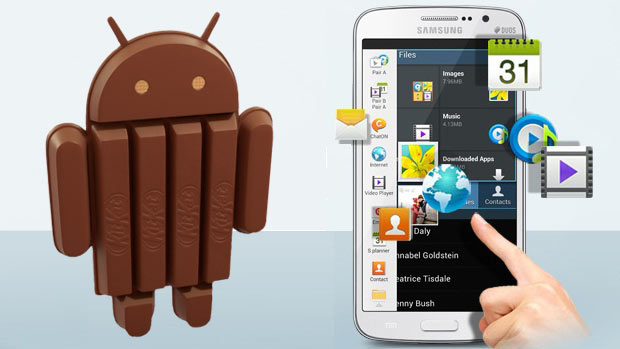 The Samsung device was launched in January last year as a successor to the much popular Galaxy Grand. It features a 5.2-inch HD display and runs on a 1.2GHz quad core Cortex-A7 processor sitting atop a Qualcomm Snapdragon 400 chipset. This setup is accompanied by 1.5GB of RAM and 8GB of storage which is of course expandable by means of its microSD card slot.

Here’s a clear look at the specs of the Samsung Galaxy Grand 2:

Like we said, the Android 4.4 KitKat update for the Samsung Galaxy Grand 2 Duos is live now in India and owners of the smartphone should receive notifications to download it anytime.