Samsung Galaxy Golden flip phone is priced at a whopping Rs 51,900 in India

If you are a fan of clamshell phones or even alphanumeric keypads and do not want to opt for a feature handset, then Samsung Galaxy Golden is meant for you. Many users in India will like the idea of owning a flip device, but they will have to think twice before choosing this gadget as it carries an exorbitant price of Rs 51,900.

So what can you expect from the handset for which the South Korean company is asking for more than half a lakh rupees? Well, for starters, the Android Jelly Bean 4.2 platform that brings an intuitive and user-friendly interface to both the inner and the outer screens of the phone. Both the displays offer a viewing real-estate of 3.7 inches and are of the Super AMOLED type. 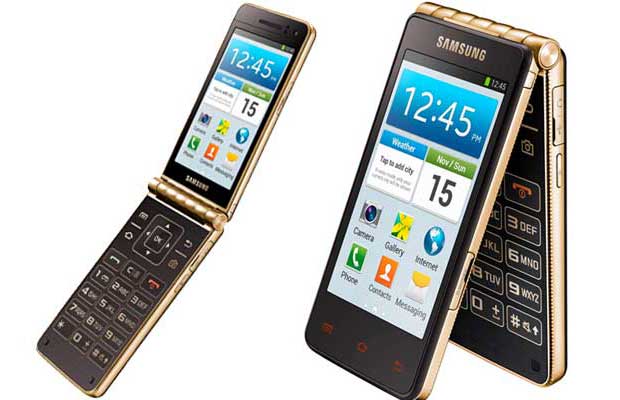 The device is encased in a black exterior with golden edges and has a rear panel with a smooth textured finish. This design is supposed to proffer ease of use. Features like Easy Mode that brings large icons and highlights a user’s favorite apps as well as Hidden Receiver for answering calls without opening the phone, have been deployed in it too.

A list of its key specifications has been jotted down here:

The Samsung Galaxy Golden is available now through leading retailers in India. Also, it should be noted that Samsung is selling the Galaxy Note 3 for a discounted rate of Rs 47,900 in the country, while the recently unveiled Galaxy Note 10.1 2014 edition tablet will set you back by Rs 49,900.