The IFA 2013 will also witness the launch of the Samsung Galaxy Gear smart watch in addition to the highly anticipated Note 3 phablet. And while there’s around two and half weeks left to go for the official unveiling, specifications of the accessory have managed to slip out. Various manufacturers have started to show much interest in wearable gadgets. Google already has its Glass project going on and a couple of OEMs have even launched their own smart watches.

So what makes Samsung’s version special? Well, so far it has been speculated that the company will design the gadget with a flexible display. And the latest leak which comes through SamMobile has highlighted various key specifications. The display size is said to measure 1.67 inches wide proffering a 320 x 320p resolution. The report notes that it will feature an AMOLED panel, but doesn’t mention whether it will be flexible. Now, we get to the interesting part – The Samsung Galaxy Gear will be powered by an Exynos 4212 dual core processor clocked at 1.5GHz, ARM Mali-400 MP4 graphics and 1GB of RAM. 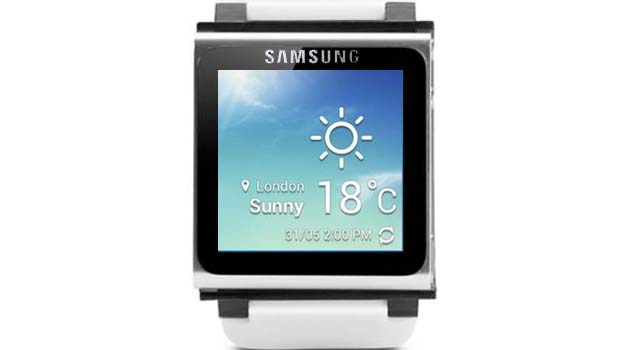 Does an accessory really need that much oomph to function? Google’s Glass uses a dual core OMAP 4430 AP and 682MB of RAM to carry out tasks which need the resources, like navigation, projecting a display and basic smartphone functions amongst others. So could Samsung be planning a similar device, but a type which can be worn on the wrist? The specs apparently indicate so as there’s also mention of a 2MP camera in addition to Bluetooth and NFC.

The report highlights that the aforementioned details on the Samsung Galaxy Gear smart watch have been sourced through an anonymous tipster and there’s no confirmation of this information as yet. For reminder’s sake, the device will go official along with the Galaxy Note 3 at the Mobile Unpacked Episode 2 2013 event which is scheduled for September 4.