Samsung Galaxy Core price in India and release date out 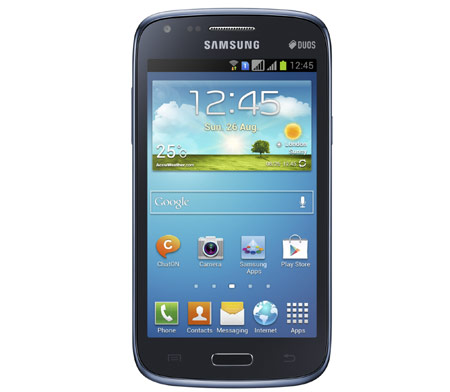 The Samsung Galaxy Core, the launch of which we had witnessed back in May, has finally hit Indian shores with a retail value and release date in tow. Equipped with a 4.3-inch screen, this Android smartphone from Samsung is all set to start shipping on July 1, tagged officially on the company’s eStore priced at Rs 15,350. However, shopping outlets within the country are offering it at lower rates right now.

Those wishing to buy the Samsung Galaxy Core have a few other options that they can explore in terms of online stores. Infibeam is offering it at Rs 15,199 in its blue shade, while strangely enough, Flipkart has slapped different values for the white and blue models. The former is available with a shipping promise of 8 to 10 days at Rs 15,200 and the latter can be pre-ordered at Rs 15,350, but with a special offer of zero processing fees on three- and six-month EMIs. It’s valid only till June 30.

Specifications of the Samsung Galaxy Core include a 4.3-inch TFT display possessing a WVGA resolution of 480 x 800 pixels. It runs the 4.1 version of Android Jelly Bean, and of course, relies on TouchWiz for its user experience. This dual SIM device also features a 5MP primary camera and a 0.3MP secondary one. Inside it lays a 1.2GHz dual core processor that is assisted in its operations by a 1GB RAM.

8GB worth of internal memory makes its way into the smartphone, apart from a microSD card slot. Its 1,800mAh Li-Ion battery claims to grant it a talktime of up to 9 hours and standby time of up to 300 hours. Unofficially a successor the S Duos, this phone has its size set at 129.3mm x 67.6mm x 8.95mm, whereas it tips the scales at 124 grams.

As mentioned above, the Galaxy Core is up for grabs right now, with its price hovering around the Rs 15,350 mark. Its official date of arrival is July 1.