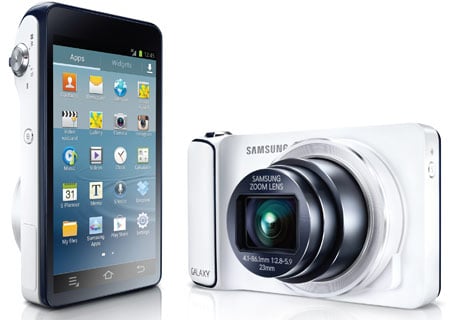 Turns out that those ridiculous renders of an S3 inescapably fused to a point-and-shoot weren’t far from what the official Samsung Galaxy Camera actually looks like. It is indeed ludicrously sleek in appearance and feasts off Android Jelly Bean to top it off.

Unveiled at the IFA, where all cool devices go to debut at this time of the year, the Android camera has arrived with a 16MP 1/2.3” BSI CMOS sensor. The user interface is played out on a 4.8-inch HD Super Clear LCD touchscreen and photographers also have the option to employ Voice Control for zooming in or shooting.

Let’s get the key specifications out of the way now – the device has an f2.8 23mm 21x super long zoom lens and a 1.4GHz quad core processor. Featuring optical IS, it boasts of up to 8GB onboard hoarding space and there’s a memory slot for slipping in a microSDSC, microSDHC or microSDXC card.

“The Galaxy Camera opens a new visual communication era and shifts a paradigm in communication. With the growth of social networks and the prevalence of smartphones and tablets, people today communicate faster than words,” expressed JK Shin, President of IT & Mobile Communications Division at Samsung Electronics.

“As we increasingly articulate our experiences through pictures and videos the Galaxy Camera has been created to lead the way in this new era of visual communication. Communication becomes more vivid and lively with high-quality images and instant sharing anywhere, anytime,” added Shin. 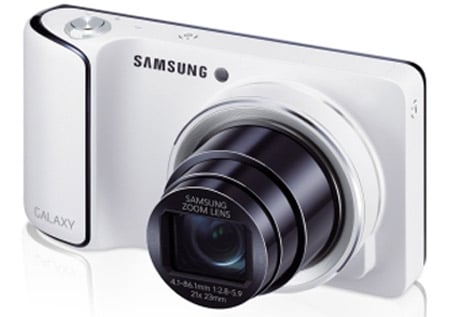 The company has even packed no less than 35 image editing tools clubbed under the Photo Wizard section, into this Android 4.1 shooter. There’s access to Google Mobile services, web browsing, Auto Cloud Backup and more. All of these features and a 1,650mAh battery are stuffed into a chassis which measures 128.7mm x 70.8mm x 19.1mm.

There nothing’s solid on the Samsung Galaxy Camera price and release date as of now. But it’s hardly likely that the company will wait until 2013 to launch the device.