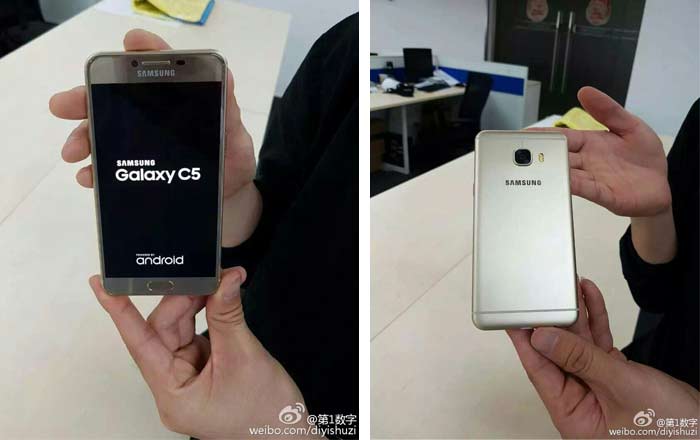 We’re now witnessing a leak of yet another Samsung handset, the upcoming Galaxy C5. As had been hinted in previous leaks, the images are showing the device to feature a full metal body with the rest of the design cues being typical to the South Korean company’s other smartphones.

The Samsung Galaxy C5’s front isn’t much different from that of the Galaxy S7, with the arrangement of the earpiece, the fingerprint scanner and other little knick knacks being the same. However, the image of the rear surface shows us a full metal architecture somewhat reminiscent of the iPhone.

These images have come via Weibo, and have spotted by Sam Mobile. As you can see, the device’s display clearly shows the Galaxy C5 branding on it.

It has been said that Samsung has equipped its newest handset with a 5.2-inch display bearing 1080p full HD resolution. This panel will most probably be of the Super AMOLED type, if we’re guessing right.

The Galaxy C5 will run on an octa core Snapdragon 617 processor that will be paired with a whopping 4GB worth of RAM. Android 6.0.1 Marshmallow will be the base OS which is no surprise, given the fact that the Galaxy J5 (2016) and Galaxy J7 (2016) which entered India today have the same OS as well.

Other than this, no other details about this Samsung offering are available in the open. It can be speculated that a fast and high resolution camera will be present on its back, aside from a good enough front camera and a large enough battery.

Let us now wait and watch when the Samsung Galaxy C5 is made official by the company. It is expected to be launched in China first.