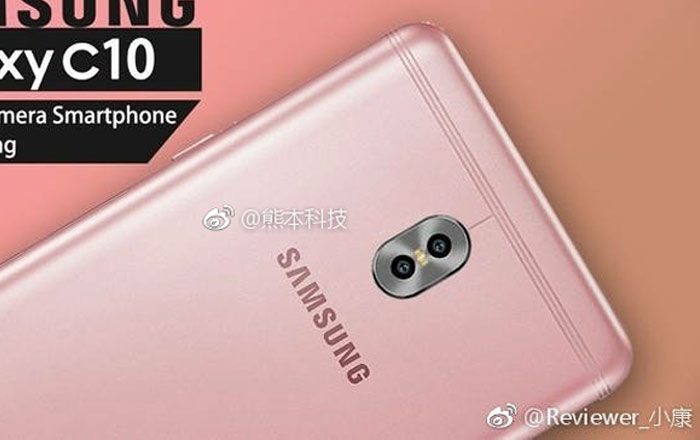 The Samsung Galaxy C10 has been the subject of quite a few rumors over the past few weeks. Now a Weibo post showcases what may well be the very first look at the upcoming device.

The alleged photo of the Galaxy C10 can be taken as confirmation that it’ll be the first Samsung phone to sport dual cameras. The module has long been rumored for the Galaxy Note 8, but it looks like the former will beat it to the punch.

Samsung has done something like this before, making the Galaxy C9 Pro the first device from its portfolio to pack 6GB of RAM rather than one of its flagships. The Galaxy C10’s twin shooters have been placed in a vertical formation with a dual-LED flash unit between them.

Little else can be gleaned from the render other than the fact that the Samsung phone will be sold in a rose gold color and feature distinct antenna bands at the top. The back is prominently curved at the sides. Unfortunately, there’s no corresponding picture of the front of the handset.

If Samsung sticks to old patterns, there will probably be a 6-inch Super AMOLED 1080p display and an oval home button which doubles up as a fingerprint scanner up front. The brand is likely going to carve the upcoming smartphone out of aluminum, just like its predecessor. Specs-wise, previous speculation has hinted that it might run on a Snapdragon 660 processor.

We’ll keep you updated as more details about the Galaxy C10 trickle in over the next few days. Given the Chinese origin of the leak, the device could be released in that country first followed by markets like India.