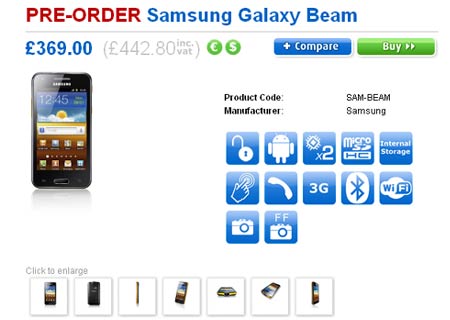 The Samsung Galaxy Beam price and availability details are out for those patiently waiting to lay hands on the device in question. Potential users are now one step closer to laying hands on it and can pre-order this handset by heading over to the Clove UK website.

Just as its name suggests, the device features a built-in projector that is designed to beam content including photos, videos, maps, business documents, games as well as other digital media onto various surfaces like walls, ceilings and even in outdoor environments. Through this attribute and the 15 lumens of brightness it offers, users should be able to conveniently transform almost any surrounding into an entertainment hub. Accompanied by an application dedicated to the projector, the smartphone is said to be capable of displaying content in HD, which stretches up to a maximum of 50 inches wide.

The handset first made its appearance back at the CES 2012. It runs on the Android 2.3 OS and incorporates a 480 x 800 pixel WVGA TFT display that stretches up to 4 inches diagonally. Fitted within dimensions of 64.2 x 124 x 12.5 millimeters are components such as a dual core processor with clock speeds of 1GHz, a 5MP rear facing AF camera and a 1.3MP front facing snapper, Bluetooth 3.0 + HS, Wi-Fi b/g/n, 1GB of RAM and 8GB of internal storage. The device weighs approximately 145.3 grams. To fuel these offerings is a 2000mAh Li-ion battery. 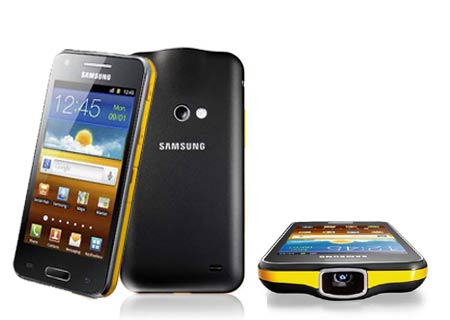 According to the official Clove blog, the Samsung Galaxy Beam price and availability details are likely to change once confirmed. At present, the handset can be pre-ordered for £442.80, which is inclusive of VAT, through the Clove UK website.