The wait for the Samsung Galaxy Alpha is almost over as a new report has surfaced with confirmed details about the launch date for the highly anticipated smartphone. What’s exciting is that the device is just a few days away from being unveiled and we could hear an official word about its existence on Monday.

SamMobile says that the launch date is confirmed for August 4. While we’d recommend taking this information as a rumor, the source is pretty reliable and has been accurate with multiple leaks. Previous reports suggested that we might see the the Samsung Galaxy Alpha get unveiled sometime mid of next month or early September, but there’s a valid reason for it arriving as soon as next week.

Samsung might not want the device to share the limelight with its upcoming Galaxy Note 4 that’s scheduled to go official in September and a month might be enough for the excitement to simmer down. Unlike the majority of devices from the Korean conglomerate, the Galaxy Alpha will feature a metal design. Sadly, it won’t be a flagship phone as previously rumored.

That means you won’t find a 2K display or the latest Snapdragon 805 chipset. What we know so far is that the phone will sport a 4.8-inch touchscreen with 720p visuals, 32GB of internal storage (non expandable) and a fingerprint scanner. The heart rate monitor should also be onboard, but hasn’t been confirmed as yet. And don’t expect to find a water-resistant design either. 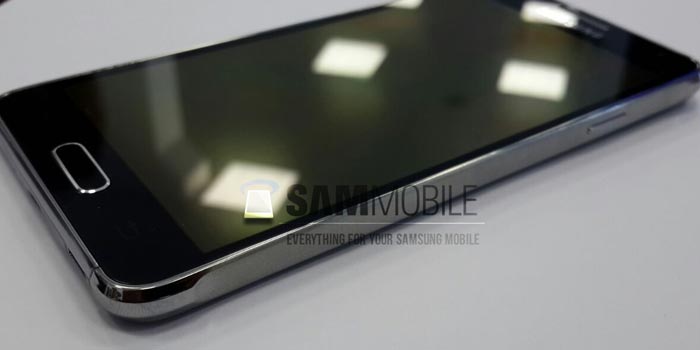 The Samsung Galaxy Alpha is rumored to be a limited edition phone and it could go official in select markets, South Korea being one of them.