It was only a matter of time that the Samsung Galaxy A7 would get leaked in detail and that has finally happened. We now know almost everything about the smartphone (except for what it looks like) and also its smaller siblings, namely the A5 and A3, which are powered by 64-bit quad core Snapdragon processors.

In a previous report, we highlighted that the Samsung Galaxy A7 will be more of a high-end release unlike the other members in the lineup. So it should come with a beefy processor, right? Well, GFXBench agrees and highlights that the device will sport a Snapdragon 615 SOC with Adreno 405 graphics. 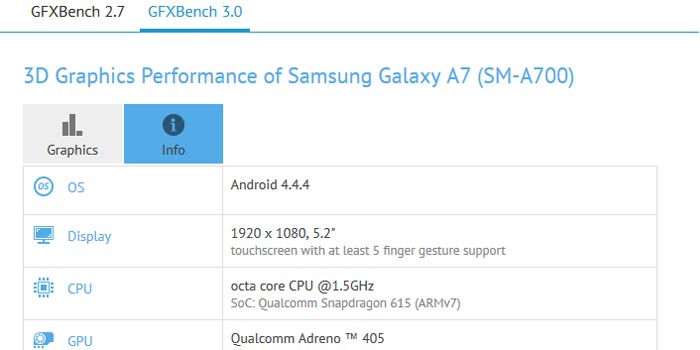 The chipset is an octa core one based on the Cortex A53 and as previously leaked on the company’s website, it’s clocked at 1.5GHz. What’s more, the phone isn’t going to be a 5.5-inch phablet as rumored, but slightly taller than the Galaxy S5 flagship at 5.2 inches. The screen will be an AMOLED one with 1080p visuals.

The benchmark listing has also highlighted that the A7 will come with 2G RAM, 16GB internal storage, a 12MP rear camera, a 5MP front snapper and various connectivity radios such as Wi-Fi, NFC, Bluetooth and GPS. The entire Galaxy A series is rumored to have premium designs crafted from a material that closely resembles the look of metal.

Samsung Galaxy A7 specs at a glance:

We expect to see the Samsung Galaxy A7 and its smaller siblings go official sometime next month.