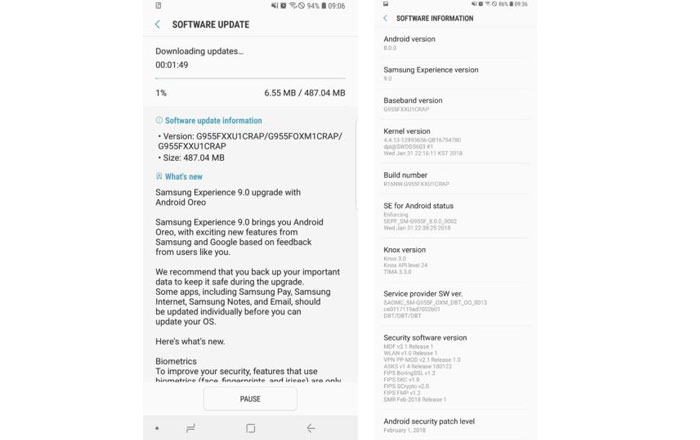 Samsung’s finally started rolling out its Android 8.0 Oreo update for the Galaxy S8 and Galaxy S8+ after several months of testing. The upgrade has begun its journey in Germany, but should spread to other countries soon.

To recall, Samsung kicked off the Oreo beta process for the Galaxy S8 and Galaxy S8+ back in November last year. The company had promised to beam the official version to beta testers first when it came along. True to its word, people on the beta channel have begun receiving the promotion before others.

Ordinary folks who are still on Nougat should get Oreo soon. SamMobile points out that the download size will be smaller for those on the beta. They can check if they’ve gotten the upgrade by going into Settings > Software and then choosing ‘Download updates manually.’

The promotion to Android 8.0 comes bundled inside firmware version G955XXU1CRAP for the Galaxy S8+ in Germany. It weighs in at 487.04MB and gets a taste of Google’s latest February 2018 security patch as well. Oreo is actually coming as part of Samsung Experience 9.0 which includes a ton of changes.

For instance, the Galaxy S8 and Galaxy S8+’ keyboard is getting a makeover to become more convenient. There’s a toolbar to quickly access options like emojis and GIFs, as well as 4 new high-contrast layout options. Bixby has gotten a bit smarter and can now do things like update users on the weather when their alarm rings.

Samsung sent out Android 8.0 to the Galaxy Note 8 last month, although it wasn’t clear at the time whether this was a full release or a small soak test. With the big 3 out of the way, the Galaxy S7 should be next in line to get Oreo.