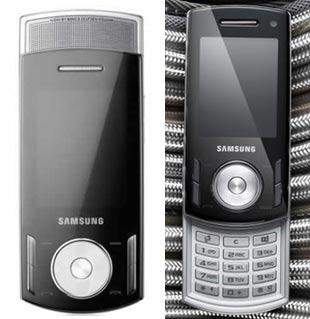 Samsung steps in once again into competition with its music phone named Samsung F400 with the announcement of the launch of this booming phone. The phone appears with an assurance of satisfying every music lover in town.

The Samsung F400 phone gives the punch to its music with the ICEpower technology by Bang & Olufsen. The device can provide crisp music clarity with its control on the Smart Bass technology which provides smooth listening and is teamed with the Smart Limiter technology that keeps a check on the audio signal so it does not exceed the limits, giving crackling sounds. The phone shows off its unique dual slider design which shows off its metallic keypad when the upper body slides up and just slides the upper body downwards, the F400 reveals an interesting set of dual stereo speakers that transform this phone into a music player.

The metallic keypad has been treated with a soft brushing leaving it with a hairline pattern. The Samsung F400 also snaps great pictures with a 3MP camera. Listen to more music tracks from its integrated FM Radio and Bluetooth connectivity to transfer those files across to your friends. The handset bundles a 1GB SD memory in its packaging and a microSD slot that can support cards up to 8GB. The phone also adds in a neat application ‘Shazam’ which provides a one-button access to the music and environments of your choice.

With colors of black and white, the Samsung F400 will first make an entry in France this month and will then slide to other locations like Europe, Asia, Southeast Asia, and Middle East. The price of this music blasting phone has been kept behind closed doors.