Samsung Exynos 5420 Octa SOC announced, might land up in Note 3

After being teased last week, the Samsung Exynos 5420 Octa SOC has gone official from the South Korean conglomerate. For this revision, Samsung has decided to drop PowerVR graphics which have been featured in its previous octa core smartphones, and it has designed the latest chipset with enhanced graphics performance through the Mali-T628 from ARM.

The first AP in the series based on the Cortex A15 was the 5 dual which also took the Mali road with the T604 GPU and it can be found in the Nexus 10. The T628 in the Samsung Exynos 5420 Octa is said to deliver double the graphics power found in previous octa core CPUs. The chip supports OpenGL ES 3.0 and Full Profile Open CL 1.1. 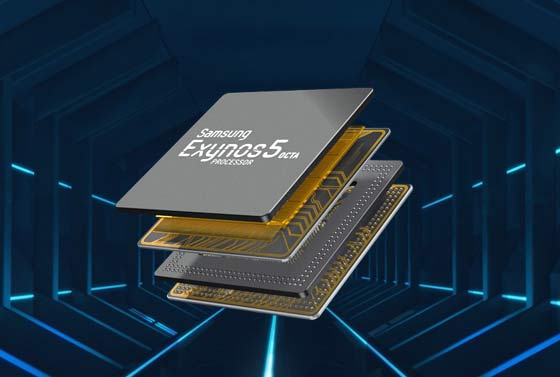 Well, an improved graphics module isn’t the only thing the Samsung Exynos 5420 Octa has to offer as this revision is also based on the big.Little approach. Here, 4 Cortex A15 cores, each operating at 1.8GHz, are clubbed together with quad power-efficient Cortex A7 cores clocked at 1.3GHz. The overall increase in performance is said to be approximately 20%.

These changes should make it at par with Qualcomm’s Snapdragon 800 which is currently implemented in the S4 LTE Advance and is rumored to arrive in some variants of the Galaxy Note 3. The Samsung Exynos 5420 Octa will even be compatible with WQXGA 2500 × 1600p resolution and dual-channel LPDDR3 memory at 933MHz. Various video hardware codec engines have been implemented as well, for 1080p full HD playback at 60fps.

The Exynos 5420 Octa will be displayed at SIGGRAPH 2013 and it’s currently being sampled to customers with mass production expected to commence in August.