The Samsung eMMC 5.0 memory modules have hit the production line and they are said to be the ‘world’s fastest’ embedded storage chips as well as the first of their kind to be designed based on the said technology. If you were to ask us, Samsung appears to teasing certain components that would possibly land up into its upcoming Galaxy Note 3 phablet. Over the week, the company announced a beefed up AP to its Exynos 5 lineup and the development of 3GB RAM modules.

The Samsung eMMC 5.0 modules will arrive in the usual flavors – 16GB, 32GB and 64GB. And according to the presser, they will be deployed in next-generation smartphones and tablets. Aiming for the title of the fastest embedded memory, the chips are said to be capable of peaking at 400MB/s, enabling quick application booting and reduced loading times. The latter two storage choices will be able to operate at 250MB/s sequential read speeds and write sequentially at 90MB/s. According to the company, these modules are over 10 times faster than class 10 external memory cards. 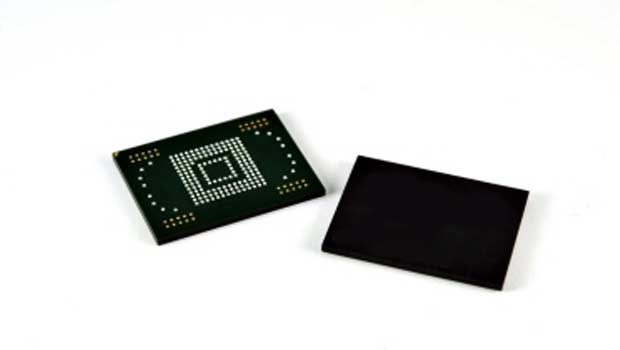 The company asserts that the 32GB and 64GB can also obtain random read and write speeds of 7000 IOPS. The Samsung eMMC 5.0 modules have been developed by leveraging the 64Gb 10nm class NAND flash technology and they measure 11.5mm x 13mm in dimensions. Additionally, the conglomerate has integrated its own NAND controller and firmware into the modules.

The 16GB, 32GB and 64GB eMMC 5.0 modules along with the latest 3GB LPDDR3 mobile DRAM and the new Exynos 5420 Octa SOC which packs Mali-T628 graphics, may well be scheduled to arrive through the Note 3 smartphone which is expected to debut on September 3. More details on the phablet can be found here.