It’s like Samsung suddenly remembered that it had a stock of flip phones lying around, brought them out and modded them a little before hitting us with the Hennessey first and now the Galaxy Golden. Yes, that’s two Android clamshells launched within a week of each other.

If the South Korean giant is sure that flip phones will strut the runway again, it’s certainly early in line this time. Major brands haven’t exactly been leaning in favor of such form factors even if carriers like NTT Docomo can be spotted adding a clamshell or two to their portfolios now and again. 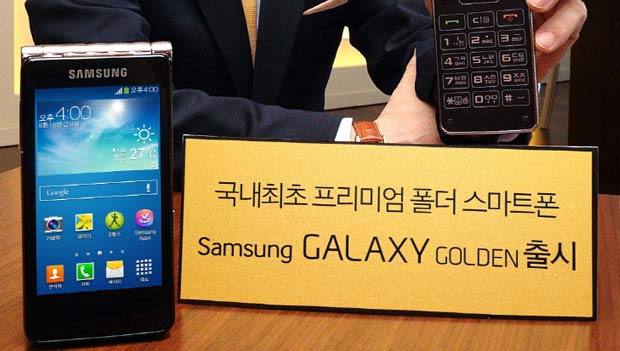 The phone works with a dual core 1.7GHz processor and Android Jelly Bean 4.2. Affixed to it are two 3.7-inch Super AMOLED displays. It’s a little difficult to imagine why most people would want handsets made bulkier by the inclusion of a second screen. Well, to each to his own. An 8MP camera sits on the back panel and apart from clicking selfies, you can also use it to store the details on a business card courtesy of in-built software. Lastly, almost taking the fizz out of Apple’s supposed notion of champagne gold rendering a touch of elitism to a device, it sports the said color on its rear and edges.

The price of the Golden is supposed to be a little more than $700 according to the Samsung Tomorrow blog. But Engadget seems to think that Google Translate could have got it wrong. After all, better specced ones sell for less than that.