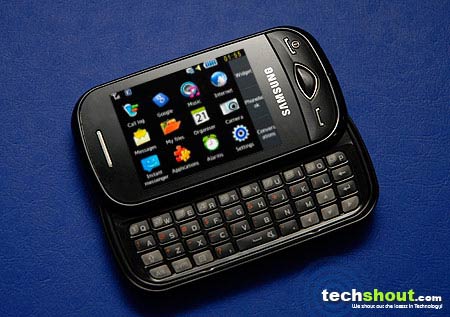 It would be very difficult to deny the fact that touchscreens are capturing the imagination of mobile phone manufacturers everywhere. We’d call them magically simplified user interfaces if asked to describe them in technical terms free of the usual drab jargon. It may have not come to a point where every other handset owner boasts of a touchscreen phone in his pocket, just give it some more time, we say. It’s not only expensive smartphones but your regular mobile phones that have been hitting the market in touchscreen varieties of late. Need we mention that the attached price tags may generally be considered quite reasonable by those wishing to invest in them?

Speaking of touchscreen phones, Samsung has rolled out a long line of such handsets dubbed Corby, Corby Txt, Corby Mate, Corby Plus, Corby Pro and Corby Pop in the past six months. Only taking appearances into consideration, the colorfully splashed out Corby Pop was our favorite from among the aforesaid models. That doesn’t mean we’d dismiss a chance to review other Corby members. For those who’d like to know our opinion of the Samsung Corby Plus a.k.a. B3410, we’ve jotted down a review from the user-angle.

If our first perception of the phone were to be framed in one sentence we’d say that the chassis is not spectacular to behold. So don’t take the title literally, we weren’t hinting at its physical attributes. The model we reviewed had a black hued body. Its front panel sports three buttons, one each for answering calls, canceling calls/turning off the phone and navigating back to the previous function. The back panel would have looked just fine if it hadn’t been marred by white dots of varying sizes. Until we can think of a better way of putting it, the color-scheme made the back panel look a bit worn-out. The edges are bordered by a USB charging port, dedicated camera and voice recorder, phone locking keys, a 3.5mm audio jack as well as volume controls.

On the whole, the phone’s curvy body is easy on the hands though a little bulky which is not something unexpected with the slider-type QWERTY keypad that accompanies it. Whereas, the Corby Pop fits into the palm like a dream although users have to do without the physical QWERTY keypad. Messaging is pretty easy on the fingers though we confess to getting the ‘T’ button confused with the ‘S’ button an umpteen number of times since the former had a large ‘5’ sharing space with it. The numbers should have been marked in smaller sized characters to prevent users from losing sight of the alphabets at their fingertips. Apart from that statement, we have no complaint against the slider keypad. The buttons are fair sized and spaced conveniently enough for user comfort.

Moving on to the touchscreen interface that is attributed with Touch Wiz intelligence, it wasn’t easy navigating through the various applications. There wasn’t any noticeable lag between touch input and access to applications, we just have a grouse with the modest screen size. The device’s size does not allow for one-handed operation when the keypad is not being utilized. On the other hand, if it was intended for two-handed operation at all times, the screen should have been expansive enough to accommodate the widgets in less cramped quarters. We do know that a touchscreen phone is rarely, if ever, advertised as something that one can operate with both thumbs but old habits die hard. Blame it on the fact that this Corby’s diminutive height feels just right for two-thumbed operation. 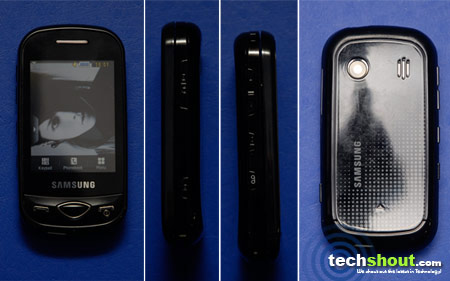 The homescreen can be customized with widgets of the owner’s choice and is expandable too. The main menu opens out to a screen featuring rather tacky looking icons for accessing the internet, applications, messenger, no less than four alarms, the camera and so on. Then we realized that the icons look better on the other background choice dubbed ‘Black’ that can be found in Display and Light, My Theme. Samsung offers the Corby Plus with 20MB of onboard memory capacity with the external memory being expandable to a maximum of 8GB. Connectivity options come in the form of Bluetooth v2.1, local PC syncing, WAP v2.0, USB mass storage, SyncML (DS) and internet HTML browser. It operates within GPRS as also EDGE Class 10 networks and GSM/EDGE 850/900/1800/1900 bands.

The integrated camera which also functions as a camcorder comes without flash and extends 4x zoom. It has the usual bunch of photo effects like Negative, Sepia, Emboss and so on. Pictures can be snapped in Mosaic shot, Frame shot, Single shot and Multi-shot modes too. The image/video quality is as good as it gets on a 2MP camera, nothing exceptional. Music lovers are most likely to fall for its clear audio quality. Even the incorporated FM radio with recording feature wasn’t troubled by clarity issues. We’re talking about music heard through a pair of headphones and not the handset’s in-built speaker, the latter of which just about hit the ‘good enough’ mark with us.

The pre-installed Java-powered games included trial versions of PyramidBloxx, Samsung Pro Cricket and Brain Challenge Vol2. If readers want to know, trial versions of games pre-installed into handsets for which we have forked out well-earned money have never had our approval. We only went as far as the Visual Bubbles round in Brain Challenge Vol2 depicting bouncing bubbles on the screen which requires players to pick the numbered bubble that bounces the highest. Not because we couldn’t get past that stage, but it was sort of annoying since it took a lot of time before the interface accepted our number selection. To add insult to irritation, choosing the right number after numerous tries rendered a green tick mark accompanied by a ‘Slow’ remark.

We liked the voice recorder that accommodates around two hours of audio though we didn’t think it needed a dedicated button. Note down a lengthy memo and watch it run across the screen like a news ticker when you access the memo book, because it’s fun. On the internet browsing experience, we have two words to utter, not bad. Other utilities like World time, calculator, Caller ID, mobile tracker, calendar and so on don’t really need a special mention according to us. So we’ll just wind up this review by noting that the 960mAh battery that powers this handset does its job very well. We got around 24 hours of average usage on a single charge.

The slider QWERTY keypad is one of the better ones we’ve seen lately. The buttons are sturdy and easy to use once you get over the large-sized numbers sharing space with the letters.

The audio system that uses DSNe 3D sound technology is quite a treat. We’re talking about FM radio too.

The exterior could do with some better designing. Or simply take away the white dots and leave a fully black-clad body.

We wish Samsung had put a larger touchscreen on the phone. Navigating through the various functions felt a wee bit cramped.

At Rs.10,050, many will agree that Samsung has presented us with a reasonably priced touchscreen handset that is does its job well. The Corby Plus scooped up an 8.5 out of 10 rating with us.