Samsung Corby Mate Review: Your Mate at a Reasonable Rate 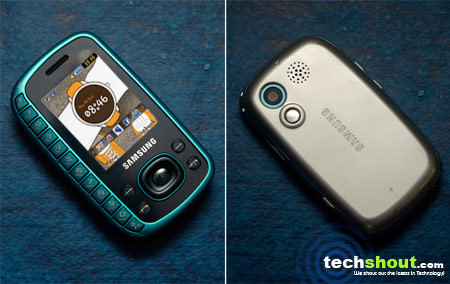 Looking for a mate? Someone who would be there at a click of a button? Well no need to consult a matchmaker for this plight as we have just the solution for you. The only exception is that the solution in question here is not really a person but a mobile phone! Yes, you read it right. We are talking about the new Samsung mobile phone dubbed as the Corby Mate or also known as the B3310.

Aptly christened, the Mate boasts of a cute and compact appearance which can be somewhat compared to the shape and size of a soap bar and fits snuggly into the palm of the hand. This particular Corby model is sure to find its way not only into the pockets of a younger crowd but also to wider audience as well. Although the inclusion of easily accessible social networking sites would appeal to the youth, the phone also incorporates basic as well as easy to use features which would definitely sit well with everyone else.

We received the phone drenched in an eye-catching and soothing green hue but you can also pick up the same in other equally trendy colors like blue, pink and black. It was certainly a refreshing sight to see the phone exuberating a bright appearance as compared to all the latest phones that sport dull colors. The handset is extremely lightweight as it weighs just 107.7g, and with a measurement of only 91 x 54 x 16.95 mm, the phone can easily be slid into the pocket or handbag.

While observing the phone, the first thing that struck us at a glance was an alpha-numeric pad sitting pretty at the left side ridge of the phone. The alpha-numeric pad is aptly located as the numbers can easily be accessed without much strain. Via these buttons, we could also type out messages without having to slide out the keyboard. Speaking of which, the Corby Mate is actually known for its messaging abilities and hence offers another input source, a QWERTY keyboard which slides out from the left side of the device. Although possessing a slide-out keyboard, the price and weight of the Samsung mobile pleasantly surprised us. Coming back to the messaging capabilities, we could directly start typing a new message by simply sliding out the QWERTY keyboard. Even when the keyboard was shut while composing a message, we could continue typing in the portrait mode through the alpha-numeric pad. 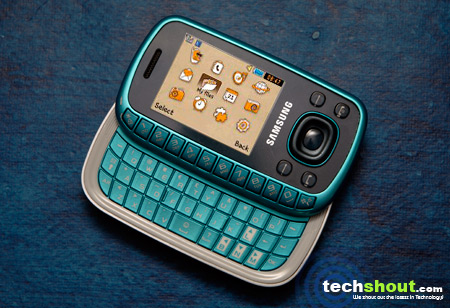 Another interesting feature was observed when inserting the phone number while sending an SMS. As we typed the first few digits of the number, a pop-down box appeared offering us suggested names and numbers plucked right out from the phone or SIM memory. The keys of the keyboard do need some getting used to but are soft and user-friendly which makes it a pleasure to type. On the keyboard, the LMNB alphabets are highlighted and have arrows above them. Through these four alphabets, we could navigate through the menu in landscape mode while also using the D-Pad on the front of the device. In the message section under the Conversations option, all the messages sent and received from a particular number were coupled together and neatly displayed in the form of speech balloons. This helps keep easy track of your conversations with the other party. There is also a regular Inbox where all the received messages get stored.

All content, pictures and data can be seen on a clear 2-inch TFT display screen with a resolution of 240 x 320 pixels. Although sporting a relatively small sized screen, the high resolution makes content look bright and vibrant. However when held in landscape mode, we got a more optimized view. The home screen can be furnished with a string of icons for quick access from which options like Messaging, Music, Facebook, MySpace, Orgainizer and Alarms can be easily acquired. As we suggested earlier, the phone does indeed cater to the social networking needs of the youth. Through the Communities option in the Applications section, there were a host of these offerings. Besides Facebook and MySpace, there was Flickr, Photobucket, Picasa and Friendster as well.

With this we come to the camera specifications. The Samsung Corby Mate includes a 2 megapixel camera with maximum photo and video resolutions at 1600 x 1200 and 320 x 240 respectively. The pictures and videos come out pretty decent but could have been better if there was a camera flash as well as special camera features like Face Detection, Smile Detections, Geo-Tagging, etc. Music aficionados may also relate to the mobile phone. It has an MP3 player as well as a couple of music features. The song list can also be espied from the home screen for easy access. The device, however, lacks an audio 3.5 jack and the speakers located at the back of the device just next to the camera don’t really emit a great sound. The handset does however include Stereo FM with RDS.

The Bluetooth v2.1 with A2DP works well and seamlessly transfers files, pictures and music. Other connectivity options include Internet HTML Browser, WAP and PC Sync Application. The phone already possesses a 40MB internal memory which can be expandable to up to 8GB with MicroSD card. The Samsung offering also provides loads of other options which come in handy in everyday life. These include scheduler, clock, calendar, world clock, alarm, converter, calculator, memo, stopwatch and countdown timer. The phone can be locked and put into silent mode via a simple long press of the star and hash keys respectively. The company claims that the phone offers talk time up to 9 hours and standby time up to 324 hrs. We managed to squeeze in a day with average usage.

The phone sports an easily accessible alpha-numeric pad which is certainly a refreshing and unique sight.

The mobile phone is lightweight even with the inclusion of a standard 800mAh battery.

The Samsung Corby Mate bears a good price tag as compared to other QWERTY keyboard handsets available in the market.

The pictures come slightly dull as there is no flashlight.

The display screen is a bit too small and would have better if it was a little larger.

To bring this review home, the Samsung Corby Mate no doubt cannot be called a high-end phone and doesn’t include touchscreen features or an accelerometer but it certainly offers a great stylish and vibrant appearance. The handset also boasts of hassle-free features which come in handy during daily use. For the Mate, we give a clear 8.5 out of 10.

The Samsung Corby Mate mobile phone is priced at Rs.7,300.