If the rumor mills are anything to go by, then the Samsung Chromebook 2 is on its way and it will apparently borrow design elements from the Galaxy Note 3. A couple of pictures of a device featuring Chrome and Samsung logos as well as a faux-leather finish like that on the back panel of the aforementioned phablet, has surfaced on the web with no other details whatsoever.

What compels us to believe that the leaked images (posted below) are the real deal is the fact that they have been let out by none other than out trusted source of news, @evleaks. And right now even this Twitter handle seems to have absolutely no details about the Chromebook 2, because it has refrained from revealing anything else. 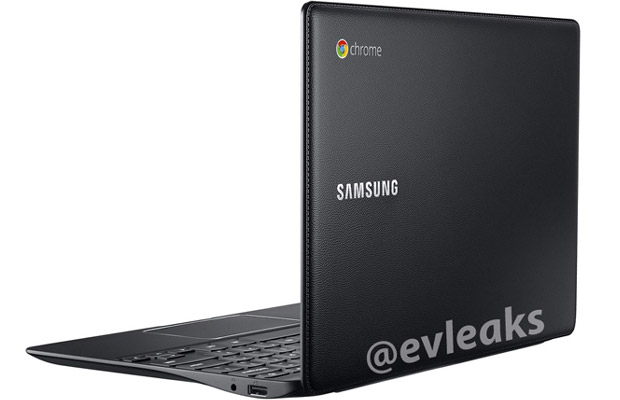 It has been a while since the first edition of the Samsung Chromebook hit availability status and it’s about time that the South Korean manufacturer introduces us to its new version. Needless to say, the upcoming gadget will tag along better features and enhancements and should be a step ahead of its predecessor.

Here’s a quick recap of the specifications of the previous generation Samsung Chromebook. Naturally, it runs the Chrome OS of Google and employs the Exynos 5 Dual processor for taking care of its multitasking properties. Fitted with a 11.6-inch HD display, the laptop brings essential connectivity ports, 2GB of RAM and a 16GB SSD amongst other things.

As of now, only the pictures of the Samsung Chromebook 2 have hit the web and we are waiting for it to go official.